The embedded image isn't an optical illusion.  That's Sergio Garcia retrieving his ball from a 15-inch-diameter cup on the putting green.


Mention 15-inch cups to a self-proclaimed golf purist, and their upper lip will quiver as their knickers bunch. “My forebears aimed at four-and-a-quarter-inch holes,” they’ll harrumph. “So it was, and so it shall ever be!”

Which, of course, is pretty much King’s point. With all due respect to golf’s timeworn traditions, the game remains so wedded to its established views that its guardians are blinded to the need for change. As a consequence, golf has become like the prostates of many of those who play it: it has a growing problem. 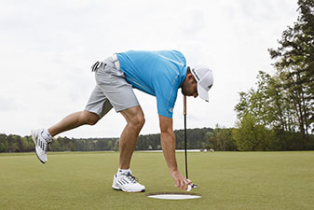 Participation is dwindling, down nearly 20 percent in this country over the last 10 years alone. While others have noted this troubling trend, King has taken outsize steps to reverse it...

...the enlarged hole isn’t meant for elite players. It’s aimed at juniors, newbies and assorted would-be golfers, those untold legions who steer clear of the game because they think that it’s too stuffy, too difficult, too boring, and the many more who have given up playing out of sheer frustration. Advocates of the 15-inch cup say that because it speeds up play and lowers scores (test-runs show that it shaves 10 strokes from the average golfer’s tally) it also has a place at easy-going tournaments and company outings. Behold the jumbo hole: a cure for the three-putt, an antidote to the five-hour round.

There is big money behind this trend.  The "King" referred to above is Mark King, CEO of TaylorMade, a premium equipment manufacturer.

There is an explanatory video interview with King at Golf.com and more information at the Wall Street Journal and at Hack Golf.  The industry is suffering - there are fewer players, and golf courses around the country are being repurposed.  Changes are imminent and this appears to be one of the more interesting ones.  I'll report later on kickball golf and on the new "party hearty" driving ranges.