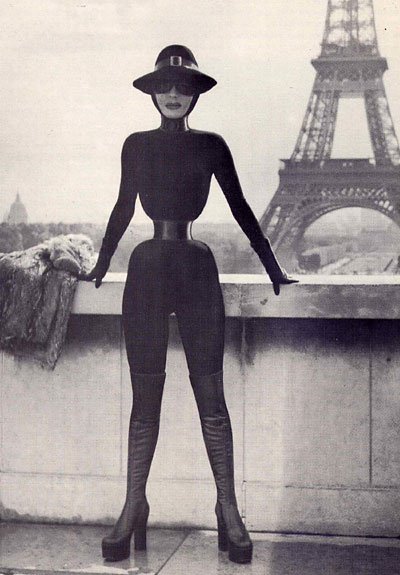 Wasp waist refers to a woman's fashion silhouette, produced by a style of corset and girdle, that has experienced various periods of popularity in the 19th and 20th centuries. Its primary feature is the abrupt transition from a natural-width rib cage to an exceedingly small waist, with the hips curving out below. It takes its name from its similarity to a wasp's segmented body. The sharply cinched waistline also exaggerates the hips and bust.

In the 19th century, while average corseted waist measurements varied between 20 and 23 inches, wasp waist measurements of 18 to 16 inches were not uncommon and were often striven for as the reigning standard of feminine beauty in the period.

More at Wikipedia. Those intereted should also read the entry for "tightlacing."

The scientifically-minded reader may be more intereted in this curious, frankly bizarre, experiment.

The photo is undated, and I don't have a primary source. Based on the other clothing, one suspects that her waistline reflects fetishism rather than fashion per se. Found at the totally-unsafe-for-work tumblr queerest of them all.

Addendum: A hat tip to Kniffler, whose web search revealed that the person in the photo is Cora Korsett,  taken in 1973.