A Pinkerton detective with lead gloves 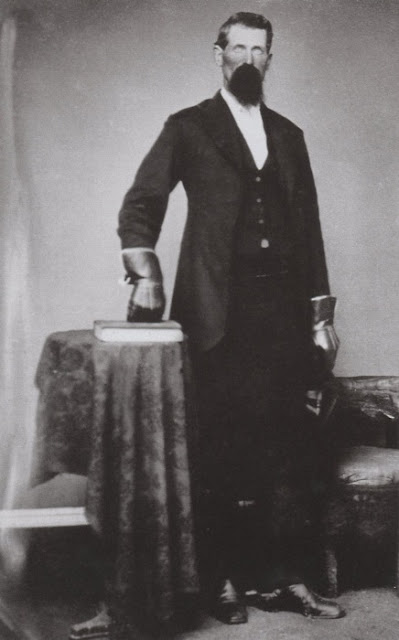 ca. 1875, [extremely tall Pinkerton detective with lead gloves] via Deadly Intent: Crime and Punishment Photographs from the Burns Archive, Stanley B. Burns and Sara Cleary-Burns
I found this at Historical Indulgences.  After musing about that bizarre mustache (?perhaps the photo was touched up to hide his identity?), I began to wonder about the lead gloves.  1875 would have been the year xrays were discovered, but one doesn't expect the Pinkerton detectives to be employing that technology.  I think I found the answer when I ran across "sap gloves" -

Leather sap gloves are also known as “weighted gloves” or “lead gloves” and have been in use by law enforcement agents and security personnel for a number of years.  The glove seems to share a common history with brass knuckles.

It cannot be exactly pinpointed when man began to cover his hand with leather for combat protection purposes; records show that the Greeks used a gloved called a cestus in combat competitions which is the equivalent of boxing today where knocking out the opponent was the objective.  The glove was basically leather thongs that were wrapped around the hand, the wrist and a good portion of the lower arm.

The Romans took this concept further and added metal parts like metal plates and spikes.  The competition also became more lethal, with gladiators using them to fight to the death.

While the brass knuckle evolved into a more damaging equipment with its solid brass construction, the sap glove is comprised of leather and powdered lead or steel.

A leather sap glove may look like an ordinary looking glove or have a more distinctive look. While other synthetic materials have been utilized, leather is commonly used.  There are purposely made pouches that contain either molded  lead clay, powdered steel, lead, or lead shot which covers the knuckle area and depending on the model also the back fingers,  back of the hand as well as the palm.