The decimation of Atlantic food fish 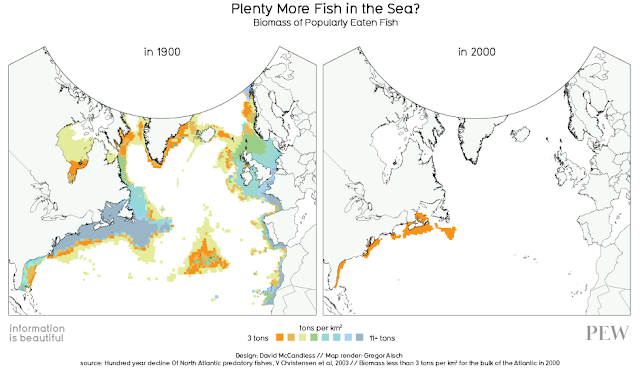 Jilted lovers used to be consoled by friends with the reassurance that "there are plenty more fish in the sea."  That analogy may not be valid much longer.  Here are some excerpts from a column in the Guardian's Datablog:


This image shows the biomass of popularly-eaten fish in the North Atlantic Ocean in 1900 and in 2000...

Dr Villy Christensen and his colleagues at the University Of British Columbia used ecosystem models, underwater terrain maps, fish catch records and statistical analysis to render the biomass of Atlantic fish at various points this century...

These early accounts and data on the past abundance of fish help reveal the magnitude of today's fish stock declines which are otherwise abstract or invisible.

They also help counter the phenomenon of "shifting environment baselines". This is when each generation views the environment they remember from their youth as "natural" and normal... The problem is, the sea was already heavily exploited when we were young. So this is a kind of collective social amnesia that allows over-exploitation to creep up and increase decade-by-decade without anyone truly questioning it...

As Prof Roberts writes: "The greater part of the decline of many exploited populations happened before the birth of anyone living today."

The study itself was published in Fish and Fisheries in 2003. Here's part of the abstract -

Writing this post has reminded me that I need to revisit my review of the excellent book Paradise Found: Nature in America at the Time of Discovery, by Steve Nicholls.  I wrote one post about the topic last year, but there's much more amazing information to present.