Alice Liddell portrayed as a beggar-maid 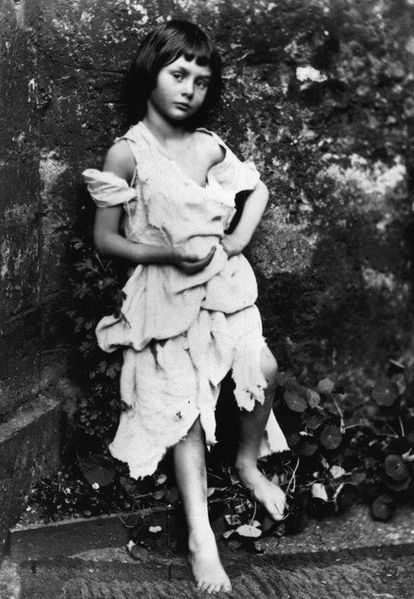 She is lazing coquettishly against a much eroded garden wall of limestone and sandstone, standing in a corner in her bare feet. She looks with a calm directness right into the camera lens, her face bearing an expression quite unutterably different from those in all the previous images. It is an expression of impish, secret knowledge, a winsome look that manages to be both confident and disturbing. Many who view it find it vaguely unsettling to return the young girl's gaze, and not a few move on to other pages, or close the book and return it to the shelves.  Yet, for most, even after the book is finally shut and put back, the memory of the image proves hauntingly and lingeringly distracting, and for a long while...

The girl stands, leaning very slightly back, though not  apparently touching the garden wall, in a seductive pose.  Her left arm is crooked and the hand placed on her waist, the fist half-closed.  Her right arm is bent in front of her at waist level, her hand cupped in a posture of a person hoping to receive alms, or else a benison of some kind.  Her hair is newly washed and gleaming, cut in page-boy style, bobbed and with a fringe, parted in a line directly above her slightly retrousse nose...

The shift is folded and tucked above her waist so that it falls double, but has been shortened to reveal her calves and, of course, her slender ankles and her surprisngly large feet.  There is sufficient shoulder, ankle, and skin revealed about Miss Liddell to excite and, these days, to infuriate...

Text from pp 5-9 of Simon Winchester's The Alice Behind Wonderland.  Every book of his I've read has been a delight to read.  I've previously blogged reviews of his Krakatoa; the Day the World Exploded and his The Meaning of Everything: The Story of the Oxford English Dictionary. I can also highly recommend The Man Who Loved China.

This book focuses on the photograph above, offering as background a biographical sketch of Charles Dodgson (his uncle, for example was "Commissioner of Lunacy" with responsibility of oversight of the country's asylums, which might be relevant to certain stories Dodgson was later to pen...), detailing what is known about Dodgson's relationship with Alice, her siblings, and the Liddell family, providing a rather detailed explanation of the new science of photography and why serious amateur photographers of the time came to prefer the collodion process rather than the daguerrotype (Stan B and other photographers who read this blog will be interested in this part of the book), explaining how Alice prompted Dodgson to write Alice in Wonderland, and detailing some of Alice's later life as a housewife and a celebrity.  All this in only 100 pages, which allows the book to be consumed in a single pleasant evening.