Exclaves vs. enclaves in the Northwest Angle 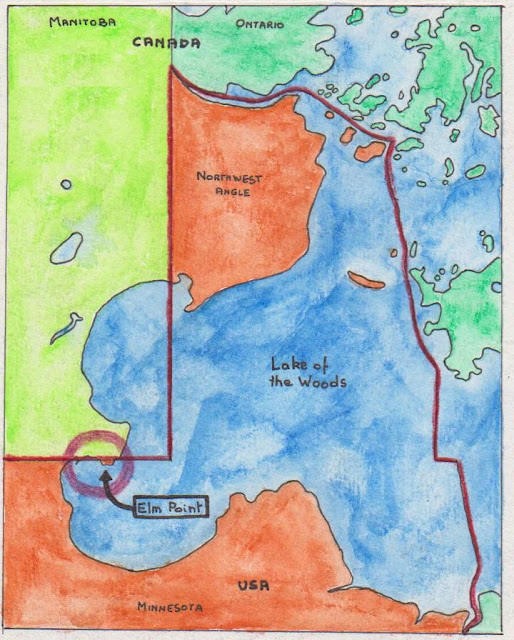 Geography enthusiasts are familiar with the anomaly known as the Northwest Angle, the most northerly point in Minnesota.


The Northwest Angle owes its existence to Benjamin Franklin, US Minister Plenipotentiary at the negotiations for the Treaty of Paris (1783). Franklin’s efforts won British acceptance for the US-British border to extend “from the most northwesternmost point” (sic) of the Lake of the Woods to the Boundary Waters (i.e. towards the east), and from that point due west to the Mississippi.

As the negotiators in Paris used the faulty Mitchell Map (which showed the Mississippi mistakenly extending too far north beyond its actual source at Lake Ithasca), such a line could not be drawn. Therefore, after the 49th parallel had been agreed as the line dividing American and British possessions west of Lake of the Woods, in 1818 a line was drawn due south from that northwesternmost point towards the 49th parallel. Hence the 90-degree upward bend in that border, creating, as the handful of locals call it, ‘The Angle’.

The interesting article in the Strange Maps blog at Big Think points out that there is a second anomalous area - Elm Point.


Point Roberts and the Northwest Angle are not the only border anomalies on the 49th parallel. A much smaller American exclave exists only a few feet from the aforementioned 90-degree bend... The 49th-parallel line skirts Buffalo Point’s southern shore... the peninsula to the south of the line is US soil, cut off from its main territory by American water and Canadian land. Unlike Point Roberts, this much smaller peninsula is uninhabited. The actual border, visible on Google Maps as a line cut clear through the pine forest, is a mere 3,400 feet long... This box-shaped border anomaly is known as Elm Point. It is part of Roseau County in Minnesota, unlike Northwest Angle, which is part of Lake of the Woods County... 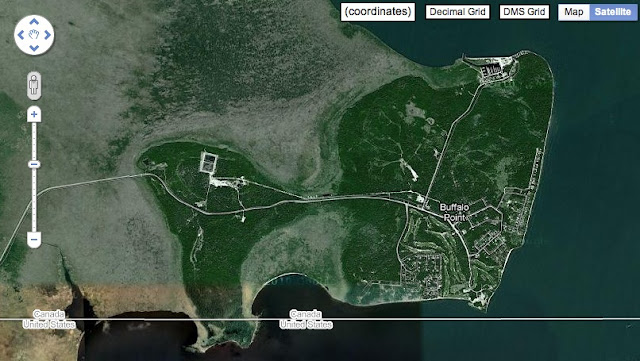 The article goes on to describe even smaller discrepancies, but I'd like to shift the focus from the geography to the definition of the terms "exclave" and "enclave."