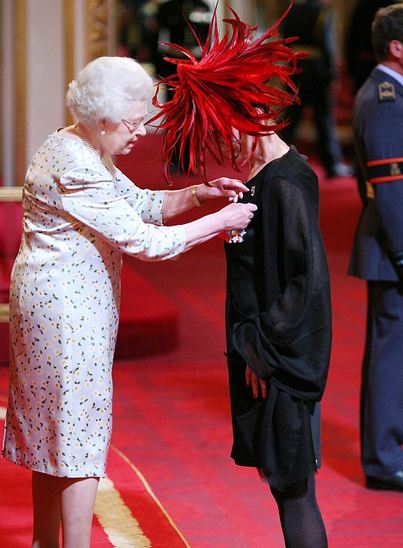 Designer Katharine Hamnett receives her CBE (Commander of the Order of the British Empire*) award from the Queen at Buckingham Palace.


"I wasn't nervous to meet the Queen at all," Hamnett told us this morning. "I wanted to put the message across that sustainable clothing can be glamorous, so I wore an organic cotton dress by Katharine Hamnett and a fabulous Philip Treacy hat made from cockerel feathers - which is a bi-product of food waste."

The rest of the story is at Vogue.  Photo credit PA Photos.

*Commander of the British Empire is an order of chivalry enstated by King George V in 1917. The title of Commander is third in seniority, the two titles above it (Knight Grand Cross and Knight Commander) automatically make the individual a knight or dame.