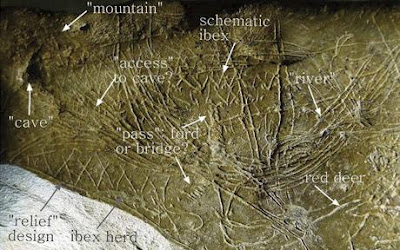 A stone tablet found in a cave in Abauntz in the Navarra region of northern Spain is believed to contain the earliest known representation of a landscape.

Engravings on the stone, which measures less than seven inches by five inches, and is less than an inch thick, appear to depict mountains, meandering rivers and areas of good foraging and hunting...

"The landscape depicted corresponds exactly to the surrounding geography," she said. "Complete with herds of ibex marked on one of the mountains visible from the cave itself."