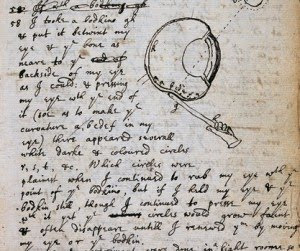 I tooke a bodkine gh & put it betwixt my eye & [the] bone as neare to [the] backside of my eye as I could: & pressing my eye [with the] end of it (soe as to make [the] curvature a, bcdef in my eye) there appeared severall white darke & coloured circles r, s, t, &c. Which circles were plainest when I continued to rub my eye [with the] point of [the] bodkine, but if I held my eye & [the] bodkin still, though I continued to presse my eye [with] it yet [the] circles would grow faint & often disappeare untill I removed [them] by moving my eye or [the] bodkin.

If [the] experiment were done in a light roome so [that] though my eyes were shut some light would get through their lidds There appeared a greate broade blewish darke circle outmost (as ts), & [within] that another light spot srs whose colour was much like [that] in [the] rest of [the] eye as at k. Within [which] spot appeared still another blew spot r espetially if I pressed my eye hard & [with] a small pointed bodkin. & outmost at vt appeared a verge of light.

As used by Newton, the "bodkin" was probably a "blunt needle with a large eye for drawing tape or ribbon through a loop or hem." The photo (credit) shows a "Charles I silver bodkin" dating from 1630.

Note what Newton was doing. He wasn't pressing on his eyeball from the front to make little sparkles. He was sticking a needle BEHIND the globe o his eye and pressing forward in order to investigate how the eye functioned to detect variations in color.

Anyone who feels that he/she is a bold medical researcher, please step back and make way for Mr. Isaac Newton...