Word for the day: Simony 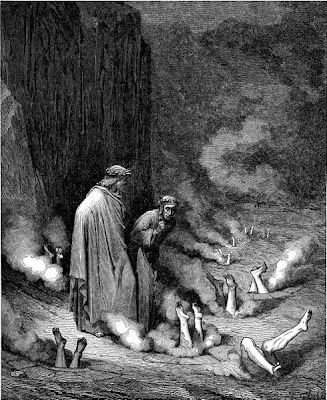 Properly defined, "simony" is an ecclesiastical crime, but in modern parlance the term has been applied more widely. It originally referred to the buying/selling of holy offices of the church.

In ancient times, practitioners of simony were condemned to Dante's eighth circle of Hell. In our era, they become President of the United States.

Ambassadorships have always been offered to campaign donors. I had hoped that Obama would break from this tradition, and we commended him on his choice for ambassador to China. Now there are suggestions that we may be dealing with "the new boss, same as the old boss"...

President Obama said he would try to reduce the number of non-career appointees as U.S. envoys abroad. But the majority of his picks so far have been wealthy donors such as Minneapolis attorney Sam Kaplan. The prominent DFL fundraiser, together with his wife, Sylvia, bundled or collected more than $100,000 for Obama's record-breaking presidential campaign.

So far, 38 of 65 ambassador appointments -- more than 58 percent -- are political, a much higher percentage than the historical average of about 30 percent, according to the Foreign Service Association…

Former U.S. Ambassador Thomas Pickering, chairman of the American Academy of Diplomacy, calls it a form of "simony" -- the ancient practice of buying public offices. "Nobody's trying to dump on all noncareer ambassadors… What's bad is the connection between how much you bundle or collect and the jobs that are given out as rewards."