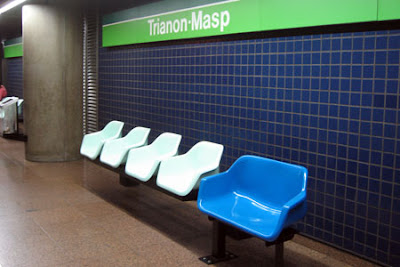 The blue-coloured seats are nearly twice as wide as normal chairs and can support even the bulkiest passenger up to 550lbs without breaking. But baffled underground bosses in Sao Paulo, Brazil say they're being ignored by obese passengers, who they think are to ashamed to use them. A sign above each seat shows a cartoon of a roly-poly passenger saying "Priority chair for obese people." "It may be that they don't want to think of themselves as fat or they resent being put in with pensioners and the disabled," said one manager.

Per a link in A. Fischer's comment, it appears that one politically correct term for obesity is that of being a "person of size."