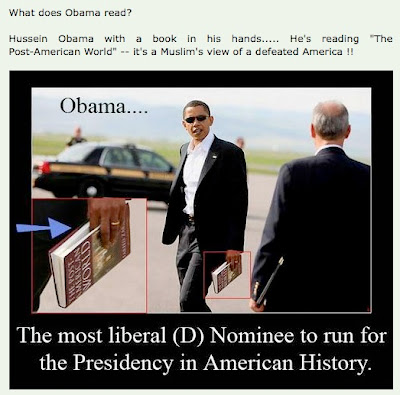 The image above has apparently been circulating by emails for the past year. Yesterday was the first time I'd seen it, but I suppose some friends/acquaintances will eventually forward it to me. That's why I was glad to see the explanation at a Reddit thread.

The image shows (note: "Hussein") Obama holding "The Post-American World," described as "a Muslim's view of a defeated America."

The email claims veracity by citing the photo's confirmation by Snopes. What they don't offer is Snopes' analysis that the photo is in fact real, but the book, despite its title, is not referring to a "defeated America" (it's about the rise of other countries, with an optimistic view of the coming century, and a prediction that America will stay strong.)