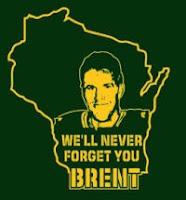 As a Minnesotan living in Wisconsin, I've followed with some interest the sports saga of Brett Favre's "divorce" from the Packers, his brief stint with the Jets, and now months of rumors that he would join the Minnesota Vikings.

Locals here in Wisconsin are not entirely delighted with the prospect of the man who has represented Wisconsin sports to the world defecting to the despised MN rival team. Accordingly, a local clothing store has created a T-shirt with BRETT Favre's face and the slogan "We'll never forget you, BRENT."

Via the Wisconsin State Journal.

Reposted in view of the report tonight that Favre has reached terms with the Vikings and will start for them in this Friday night's preseason game.