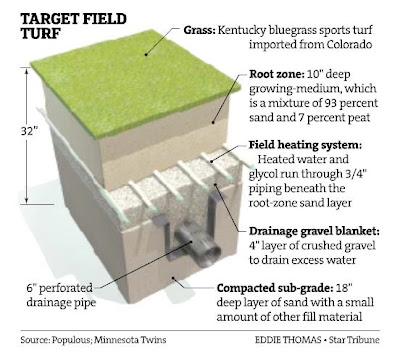 And lots of money. Minnesota is building a new sports stadium in Minneapolis to replace the current Metrodome. This will be an open-air facility reminiscent of the old Metropolitan stadium where I watched the Vikings and Twins in the 1960s. In those days when it rained, the turf became muddy. No longer.

To build the new stadium, turf was shipped in a convoy of refrigerated trucks from Colorado to Minnesota. It's understandable, but it still boggles an old man's mind. Sports fans in Minnesota have been so excited by the prospect of real grass playing fields that they

"started showing up -- usually unannounced -- at the turf farm wanting a tour to see the new playing field."

The technology that supports the grass is schematically diagrammed above.

About 10 inches below the surface, a heating system has been installed to warm the field in the early spring or the early fall of October, assuming the Twins season extends that far.

There also will be a drainage system installed that will allow as much as 20 inches of water per hour to be whisked away from the playing surface.

Twenty inches of water per hour??? This is Minneapolis, not Bangladesh - I think this is overengineered, but it's presumably considered necessary to protect the $100 million knees of the athletes. I'm not angry, and I love sports, but sometimes I get curmudgeonly about the business aspects of the games.