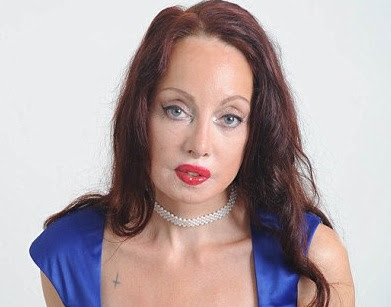 Does she look like Queen Nefertiti? Comparison photos are at the Mail Online link; whether she has been successful or not, the point is that this 49-year-old woman has spent £200,000 on her face...


The mother of three has had 51 cosmetic surgery operations - including eight nose jobs, three chin implants, one eyebrow lift, three facelifts, six mini facelifts, two lip surgeries, five eye surgeries and 20 minor tweaks - in her efforts to recreate herself in the image of the 'Beauty of the Nile'...

She began her transformation in 1987 after deciding that in a past life she had lived as Nefertiti...

I am sure some people will disapprove of me having so many operations but I believe my look is ageless and timeless. Seeing myself looking so much younger makes me feel young and energetic."

Let's all agree on one point - she spent her own money on the surgeries, and with the approval of her family. She has every right to spend her own money as she wishes, and if she prefers to undergo repeated surgeries and help support various medical personnel and medical supply companies rather than buy a Beemer or a flat in Mayfair, then that's her choice. No one should argue with that.

But... for those who argue that unlimited health care is a right, what would you do with this woman (and there are countless people like her who haven't done what she has done simply because they don't have the resources). In a way this is "elective" surgery, but some would argue that she has a type of body dysmorphic disorder and that she needs the plastic surgery for her mental health. She may not be batshit crazy, they would argue, but she needs this just as a teenager might need dental braces or acne treatment.

Finally, note that she does live (as far as I can tell) under the NHS system, and that she did pay for the cosmetic procedures with her own money. I don't know how the British or Canadian systems work, but it appears that one is guaranteed certain basic services and can then purchase additional medical care with one's own funds.

Therefore, there must be some rationing system in place. And any talk of single-payer, "universal" health care in the United States will have to include some provisions for limiting or (warning - scare word coming) "rationing" health care in order to prevent people like the lady above from using up the resources and the funds.

Again, I'm not mocking this lady. Personally I think she looked cute as a button at age 22 before undertaking her face modification quest (photo at the link), but that's her decision. I simply offer her as an example of why "rationing health care" has to be - logically and practically - incorporated into any nationalized health care program.

Photo trimmed from one credited to Murray Sanders.