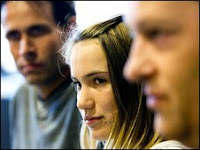 ... are different from the way they were when I was 13 years old. This morning I heard a report on BBC radio about a controversy currently brewing in the Netherlands regarding whether 13-year-old Laura Decker should be permitted to sail around the world - alone.

Her parents support her in this decision, which would break the world record for the youngest person to accomplish such a feat (current record by a 17-year-old). She would need to miss two years of school, and she would sail without any support vessels beside/behind her. The Dutch public is reportedly split on this issue; many support her, while others consider it too dangerous and equivalent to child neglect.

TYWKIWDBI won't take any stand on this girl's situation, but the story reminded me of an item I read in my high school's alumni bulletin, regarding a young girl whom I'll just identify with initials here: "C--- K--- '15... won the 2009... Skating Competition. In her long program, K--- successfully landed seven double jumps, including a double-lutz, double-toe loop combination jump."

If she's in the class of 2015, she would also be 12-13 years old. For comparison, Dorothy Hamill and Peggy Fleming won Olympic figure skating gold medals without doing any double jumps. Now a 13-year-old does seven double jumps for just a regional competition. I'm sure the analogy could be extended to many other sports.

Update: The Dutch girl is now "under state care" for two months while an evaluation is underway, which prevents her from beginning the voyage.