The "suicide cows" of Switzerland 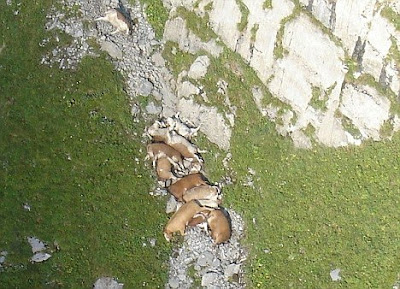 In the picturesque Swiss village of Lauterbrunnen the locals are worried.

Dozens of alpine cows appear to be committing suicide by throwing themselves off a cliff near the small village in the Alps.

In the space of just three days 28 cows and bulls have mysteriously died after they plunged hundreds of metres to rocks below where they were killed instantly.

These are clearly not "suicides." The most reasonable explanation is that people or dogs/critters are spooking the cows and causing them to tumble over the cliffs.

Blogged because the event nicely illustrates one way ancient man obtained fresh meat. Archaic hunters, equipped with stone-tipped projectiles, were capable of killing deer and bison - but a much more efficient method involved driving herd animals toward a precipice. One such "bison kill site" is located in northern Minnesota at Itasca State Park. Details about the studies of that site are at this link.

Addendum: Vivi has provided a link to the more famous (and much more visually dramatic) Head-Smashed-In bison kill site in Alberta, Canada. The brief promotional video below shows the impressive cliff where the kills occurred...