The Case of the Missing Frogs' Legs 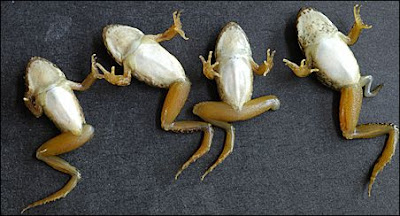 It's been 14 years since a group of middle-schoolers on a field trip discovered frogs with bizarre leg malformations.. Some of the amphibians had extra hind legs that appeared as pale, shrunken imitations of normal limbs. Some were missing legs, or had legs that were partial or misshapen. In the months that followed, frogs with the same and even worse limb deformities were discovered in dozens of wetlands across Minnesota and Wisconsin, and it was learned that similar outbreaks were already under investigation in Canada's Quebec province.

Of immediate concern was the possibility that the deformities were being caused by a water contaminant that could affect other species, including humans. By the spring of 1997, several federal agencies and a number of academic researchers were working on the problem...

Now research on frogs with missing legs in England and Oregon — undertaken independently but arriving at identical conclusions — has found a common cause of missing legs in frogs.

They're being eaten off...

For the identity of the malefactor, go to the MinnPost link.