The worldwide catastrophe of 535 A.D. 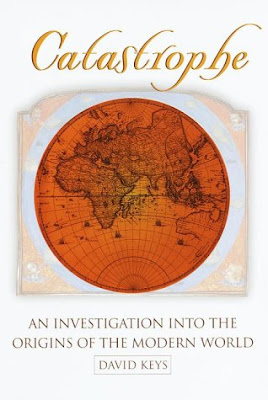 At the beginning of the sixth century, Teotihuacan was at its peak as a supercity. Tikal and Nasca thrived. The Roman empire was intact. Arabian civilization was flourishing.

The years that followed brought “the end of classical antiquity and the beginning of the Dark Ages.” Major civilizations were overthrown, immense city-states collapsed. Warfare, famine, and disease engulfed the world. Arthurian romances associate the 6th century with the Waste Land.

In the book Catastrophe. An Investigation into the Origins of the Modern World (Ballantine Books, NY, 1999), author David Keys ties all these events to the eruption of a supervolcano in 535 A.D. Chinese histories document such an event in February of 535 in the Sunda Straits – an explosive eruption that split Java in two. Yellow dust rained down in China, and since the event was near the equator the dust affected both hemispheres.

In European accounts of 535-6 "the sun gave forth its light without brightness like the moon during this whole year.” John of Ephesus, a sixth-century historian, said the sun shone for only four hours per day, and then only feebly. Britain experienced its worst weather of the century. Ireland had prologed drought and crop failures in 538 (confirmed by tree rings from peat bogs), followed by mass starvation and epidemic disease. There was snow in Mesopotamia, drought and famine in China; in Shaanxi province 75% of the population died, with the survivors practicing cannibalism. The drought in Peru lasted for over 30 years, from 540-570.

Volcanic dust in the upper atmosphere leads to darkness, and to colder temperatures, and with cooler weather worldwide there is less evaporation of water and thus less rain and thus widespread drought. The global cooling and the drought are the proximate causes of the famines and thus of the warfare. With drought and crop failure, animals die, including both small mammals (rats, mice) and their predators. When rains resume and crops revive, the small mammals proliferate in the absence of the predators, and reproduce much faster than the predators, leading to hordes of rats and ultimately the spread of the plague.

This is an interesting book, and I’ve tagged it in the Recommended Books category. The author does tend to reach too far, claiming that the events of the 6th century “paved the way for” XYZ in the 10th century, but there’s can be little doubt that this single volcanic eruption changed the course of world history.

Some interesting trivia from the book –