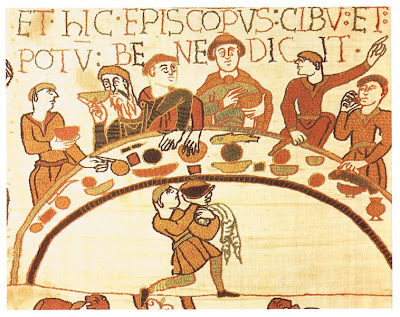 Smorgasbords will no longer be on Sundays, when I'm now too busy browsing those once-a-week sites; henceforth we'll offer a smorgasbord whenever the tasty bite-size morsels start to fill up a bookmark folder.

BASE jumping video. It takes the girl about a minute and a half to step off the cliff; one feels the urge to give her a push. The next minute is good.

An article at the Nation discusses the theory and practice of the Long War. Is the U.S. prepared to conduct a war in the Middle East for 50 years?

A cave in the Vietnam jungle reportedly has the world's biggest cave passage - 650 feet high, 500 wide. Several photos at the link.

Passengers who take prescription drugs, drink several bottles of wine, and then drink the liquid soap on an airliner will probably misbehave.

Spiders may be able to switch to anaerobic metabolism to survive periods of 24 hours underwater in a state of suspended animation.

The Daily Mail explains how and why Frenchwomen became "horizontal collaborators" during the Nazi occupation.

An elderly woman in her bathrobe cleans a window. Doesn't sound exciting. Pictures at the link.

A bill introduced to Congress will give ALL water in the U.S. to the federal government.

Troops in the Congo believe they develop "supernatural powers" if they sodomize pigmies.

During this economic downturn, many Amish are struggling with a moral dilemma, since their principles mandate that they not accept welfare or unemployment benefits.

A collection of humorous quotations from Stephen Wright. Many will be familiar to you; some will be new.

A parasitic twin emerged from a man's belly button.

A Tumblr blog devoted to a single year - in this case 1976. An interesting concept which intrigues me. I might start one for 1946.

How dietary fat improves long-term memory. Published in the respectable PNAS, and apparently sponsored by the NIH, not a corporation.

A Wisconsin court has ruled that police can put a GPS unit on your car and track your location, even if you're not suspected of a crime, and without a court warrant.

Dolphins can catch up on sleep and still remain active, because they can allow just half their brain to sleep at a given time.

Felon runs from police, who catch him. Officer then kicks the malefactor in the face when he surrenders. All of this captured on videotape.

Trailer for a new movie about teenage snowmobilers arming themselves with chainsaws to fight brain-dead Nazi zombies.

Cats on a treadmill - and enjoying the experience.

Everyone who has visited a lake knows how sound can be transmitted long distances over water. The same principle applies to sound travelling over ice - one report of hearing a human voice ten miles distant.

A website dedicated to the topic of "Ice Age America." Nice video.

Haaretz seems to support the Vatican's assertion that the Pope's membership in Hitler Youth is irrelevant.

Spiders eating creatures. Creatures bigger than they are.

The French are going to put Scientology on trial, arguing that it is a scam and an organized fraud. Bravo.

It has now been reported that chemotherapy drugs can obliterate people's fingerprints. Victims will now be at risk for prosecution for all those crimes where no fingerprints were found...

The photo-aggregating site Pixdaus now presents its material in larger format. Thumbs up. But they still don't give credit to original photographers. Thumbs down.

A man goes out with friends hunting for turkeys. He hides behind a turkey decoy and begins making turkey calls. Guess what happens.