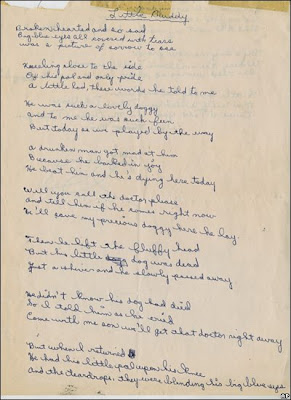 Written by Bob (Zimmerman) while at summer camp in Wisconsin in 1957, the poem is to be auctioned next month by Christie's, who describe the item as a "dark and mournful poem, about the murder of a boy's dog".

It's expected to sell for $15,000. You can read it here for free, then go up to the attic to search through your summer camp souvenirs.

Addendum: As noted by Sabsbury -

A "poem" purportedly written by a teenage Bob Dylan and up for auction at Christie's is actually a song written by the late Canadian country singer Hank Snow, the auction house said on Wednesday.

Christie's announced on Tuesday the sale of the hand-written poem believed to have been written in 1957 when Dylan was 16 and away at Jewish camp.

But Christie's failed to detect that the words, with a few minor variations, matched those of a song previously recorded by Snow, who died in 1999 at age 85.