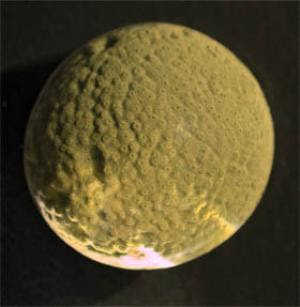 Pictured above is a huge amoeba (grape-sized, but that's immense for a single-celled organism). The Bahamian Gromia sphaerica is found on ocean floors, but the incredible new observation is that they leave trails similar to those left by multicellular organisms.

Somehow, these wee blobs are propelling themselves across the ocean floor, at a pace so slow it cannot be readily observed...

Here’s the even crazier thing: If these guys are right, this discovery could completely upend our ideas about the “Cambrian explosion.”

Remember those tracks the Bahamian Gromia left? They’re found in the pre-Cambrian fossil record. For years scientists assumed that only organisms with complex body plans that are symmetrical down the middle — “bilateria,” as they’re called — could possibly move in a fashion that would leave such trails. Thus, biologists have argued that bilateria were around before the Cambrian explosion, which sort of primed the pump for that crazily rapid diversification of bilateria into all the major animal groups we have today. But now it looks as though all those pre-Cambrian seabed trails could have been left by rolling, grape-sized ameobas. Maybe — who knows? — the Cambrian explosion happened even more psychotically quickly than we think. Maybe bilateria weren’t kicking around for millions of years later than we suspect.

More pictures and discussion at the link.