Can anyone I.D. this grey caterpillar? 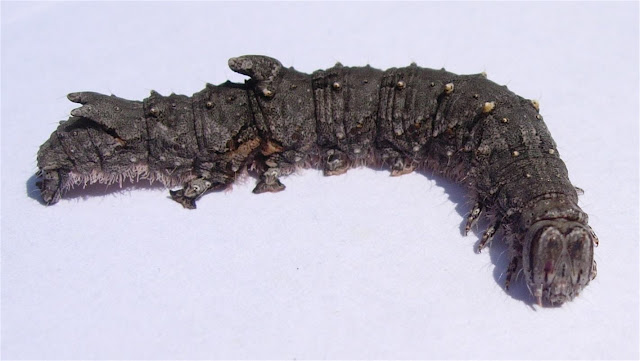 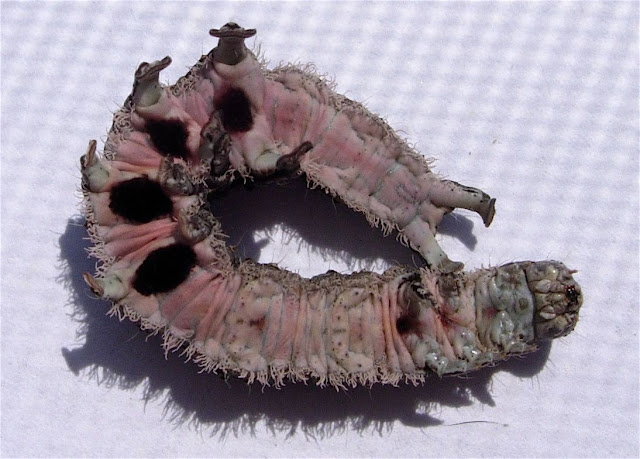 I found this little fellow twitching on top of leaf litter in a deciduous woods near Madison, Wisconsin. I didn't recognize his species, and when I picked him up, everything became even more bizarre...

The caterpillar is about 6cm in length, dark grey in color, with a series of tubercles along the dorsal aspect of the body segments. There is a horn-like dorsal appendage near the rear, and another bifurcated horn behind that. The margin between dorsum and abdomen appears to be gently "fringed."

On the ventral surface near mid-body are four large holes, with perhaps another smaller one near his forelegs. Nothing is oozing from these holes.

Left undisturbed, he/she remains virtually motionless. Overnight in a jar in my office there was no change of position. But when disturbed the cat twitches forcefully with a side-to-side motion.

I can only assume that the caterpillar was parasitized by a ?wasp, and that the parasitic young have already emerged from those holes. I'm keeping him for now in case another creature emerges from one of the other body segments.

I spent an hour last night searching for an identification of this caterpillar. I viewed most of the images at the excellent USGS Caterpillars of Eastern Forests website, then paged through several years of posts at the (outstanding) What's That Bug site, and also found nothing at Duke University's beautiful photoblog of moth caterpillars.

If any TYWKIWDBI visitors have suggestions or know of friends with entomologic skills to whom you could forward this link, I would be greatly appreciative.

First update: Courtesy of Dr. Pellitteri at the University of Wisconsin, I believe this caterpillar is in the Catocala [Underwing] genus. I'm looking for more details...

Second update: I finally was able to restrain the caterpillar sufficiently to examine the abdomen more closely (the Catocala caterpillars are apparently famous for their thrashing maneuvers). Dr. Pellitteri had suggested that the dark patches were areas of coloration, and I now think that is correct. This will come as a great relief to those of you who have been losing sleep worrying about critters erupting from the poor cat's abdomen. I'm not sure WHY coloration would be placed in such a normally unseen location, unless it serves to deter predators (birds etc) who turn the caterpillar over. This genus of caterpillar pupates underground or under leaf litter on the forest floor, so I've moved him to a jar with several inches of peat into which he can tunnel if he's ready to pupate, and I've given him some oak leaves to munch on in the meantime. If anything interesting happens, I'll post another update.