This country has adopted a bald eagle as a National Bird, but has seldom elected bald men as president, even though most U.S. Presidents have been of an age when baldness would be common. The Cynic's Sanctuary offers these observations:

Let's look at the forty-plus individuals we've elected president of the United States. All but five of them have been men of hair. Who were the five brave baldies who managed to slip past the guards? John Adams and his son, John Quincy Adams -- both one-termers. Martin Van Buren... also booted out after a single term... James A. Garfield. They shot him. After Garfield's demise, a full seventy-two years would pass before another hair-impaired president took the oath of office: the wildly popular World War II hero, Dwight D. Eisenhower.

A Time magazine editorial addressed this same topic several years ago. Now an artist has shown us how six famous Americans would look with a bald or shaved head. In the absence of other facial hair, Washington and Hamilton look like alopecia victims or chemotherapy patients. Ulysses S. Grant, however, is another matter. With that full, slightly graying beard, he reminds me of someone. The shape of the ear. The eyebrows, nose, lips, eyes. Wait, wait... don't tell me... 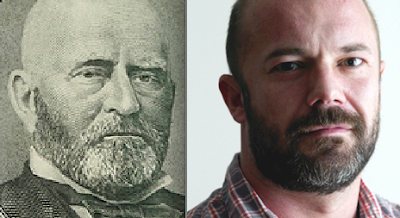