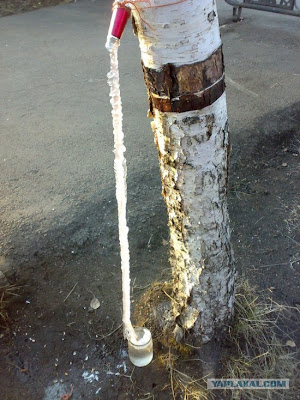 Birch tree juice drinking and harvesting is an old tradition in Russia. The main season for this fun is spring. Tens thousands of birch trees across the country become the source for this delightful liquid, harvested mainly by kids.

Usually there are two methods of doing this. One is to make a hole in the tree body itself then put some kind of straw or pipe in the hole connected with some bottle. Usually the big wine bottle gets full of the birch tree juice from one tree overnight. Another way is to break a branch and just insert the branch into the bottle, then tie or tape the bottle to the branch.

Russian expatriates abroad are often ask local groceries for bottled juice and very surprised when can’t get it.

Interesting for two reasons. I've known about tapping maple trees for sap for maple syrup production since childhood, but had never known about tapping birch (which are actually more common in this part of the country). Secondly, the technique of just breaking a branch and putting the end in a bottle sound eminently simple.

It looks to me like the photo above shows not a frozen stream, but rather the sap freezing along a string used as a conduit to direct the sap into the jar. Clever.

Traditionally, maple syrup was harvested by tapping a maple tree through the bark and into the wood, then letting the sap run into a bucket, which required daily collecting; less labour-intensive methods such as the use of continuous plastic pipelines have since superseded this, in all but cottage-scale production.

Production is concentrated in February, March, and April, depending on local weather conditions. Freezing nights and warm days are needed in order to induce sap flows. The change in temperature from above to below freezing causes water uptake from the soil, and temperatures above freezing cause a stem pressure to develop, which, along with gravity, causes sap to flow out of tapholes or other wounds in the stem or branches. To collect the sap, holes are bored into the maple trees and tubes (taps, spouts, spiles) are inserted. Sap flows through the spouts into buckets or into plastic tubing.