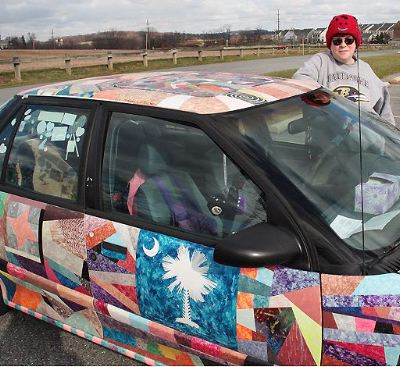 When Jill Bell noticed a dent on the hood of her car two winters ago, she thought it would be appropriate to paint a Band-Aid on the scrape.

After the painted bandage survived the ice and snow of winter, Bell decided that she wanted to repaint her car entirely - in nail polish.

Over the next 13 months, from September 2007 to this past October, she completely covered her car in a quilt-like pattern – as a quilter, she found the multi-pattern paint job fitting, she said.

Bell said she collected between 100 to 250 bottles of nail polish, but did not have an exact idea as she simply used bottles from anyone she could get it from.

Since I'm from the generation that invented and survived the "hippie" era, I kind of like it. Forget about resale - do your own thing and customize your car. No one will steal it, and she won't have any trouble finding it in a parking lot.