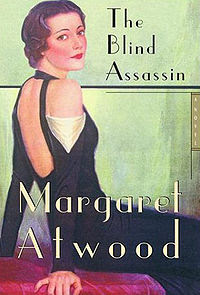 As a reader who prefers nonfiction, I had not encountered Margaret Atwood's writings until an article in ?Harpers or ?The Atlantic praised this one, so I gave it a try, and decided it's worth reviewing.

At 500+ pages the book is a bit long and likely could have been compressed a bit; there are some passages that to my ear sound awkward:

The storm was gone by nightfall, but it was still dank as a drain. I roiled around in the muddle of my bed, listening to my heart limping against the bedsprings, trying to get comfortable. (p. 135)

A "limping heart" as one "roils around" in the "muddle of a bed" seems like the effort of a young writer trying to be artistic. Such passages, however, are few, and are overbalanced by an abundance of nicely phrased (and deeply-thought) pieces. Here is an elderly woman musing over her wedding photos:

I and the girl in the picture have ceased to be the same person. I am her outcome, the result of the life she once lived headlong; whereas she, if she can be said to exist at all, is composed only of what I remember. I have the better view – I can see her clearly, most of the time. But even if she knew enough to look, she can’t see me at all. (p. 239)

Here she contemplates the development of a major tragedy:

Breakfasts, picnics, ocean voyages, costume balls, newspapers, boating on the river. Such items do not assort very well with tragedy. But in life, a tragedy is not one long scream. It includes everything that led up to it. Hour after trivial hour, day after day, year after year, and then the sudden moment: the knife stab, the shell-burst, the plummet of the car from the bridge.” (p. 417)

And some final thoughts as death draws near:

At my age you indulge in these apocalyptic visions. You say, The end of the world is at hand. You lie to yourself – I’m glad I won’t be around to see it – when in fact you’d like nothing better, as long as you can watch it through the little secret window, as long as you won’t be involved. (p. 478)

And one final witty observation:

Aimee looked like any newborn baby – she had that squashed face, as if she’d hit a wall at high speed. (p. 431)

The novel itself has several story lines intertwined into a complex but ultimately coherent plot with a surprising and satisfying outcome. It was published in 2000 and won the coveted Booker Prize that year. Time magazine lists it among the 100 greatest English-language novels since 1923. If you enjoy reading (long) novels, it will reward your time.