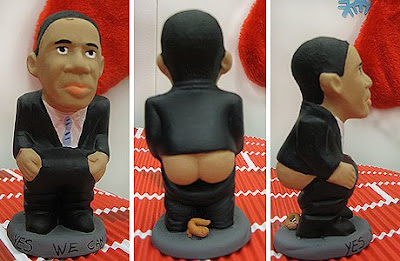 The display of caganers has been a tradition in Catalonia since the 17th century:

Accompanying Mary, Joseph, Jesus, the Shepherds and company, the caganer is often tucked away in a corner of the model, typically nowhere near the manger scene. There is a good reason for his obscure position in the display, for "caganer" translates from Catalan to English as "pooper", and that is exactly what this little statue is doing — defecating.

Traditionally the figurine depicts a peasant in a red stocking cap, but in the modern era celebrities and politicians have been used, including Pope John Paul II and George W. Bush. This year's additions include Vladimir Putin and Gordon Brown, but the best seller is Barack Obama. (Image credit here)