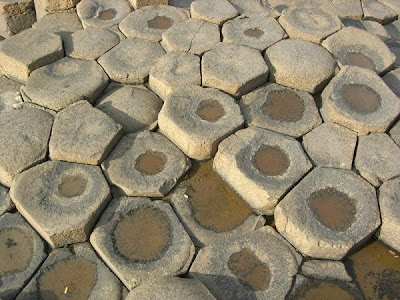 The Giant's Causeway and other similar structures around the world are composed of basalt, which is extruded from volcanoes as fluid lava. It has been difficult to explain how lava would solidify into such regular hexagons. Physicists at the University of Toronto are now reporting that they have reproduced the phenomenon using water, corn starch, and a heat lamp. It appears to depend on the rate of cooling of the lava, and the principle may be extended to explain other regular geometric figures such as that found in polygonal permafrost. (p.s. - "hexagonality" is a neologism; I needed something short to fit in the title space)