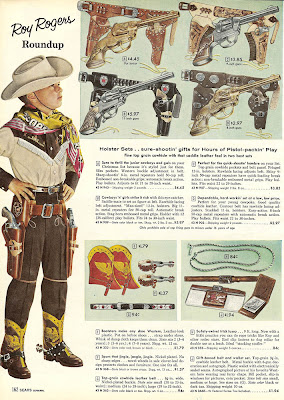 NEWTON COUNTY, Ga. -- The latest case of zero-tolerance at the public schools has a 10-year-old student sadder and wiser, and facing expulsion and long-term juvenile detention... Alandis' gun was a "cap gun," a toy cowboy six-shooter that his mother bought for him...

"We got it from Wal-Mart... That's what he wanted because it was just like the ones he was studying for the Civil War" in his fifth-grade class at Fairview Elementary School...

"On the school bus... when I dug into my bookbag trying to get my phone out, the boy beside me, he reached in my bookbag and got it [the toy gun] and started telling everybody, 'He's got a gun, he's got a gun,' and spread it around the whole bus. So I put it back in my bookbag."

The story continues at the link, with a neighborhood child calling the police to say that the boy had a real gun. Six police officers arrived at his home, booked him, and fingerprinted him.

Alandis was charged with possessing a weapon on school property and with terroristic acts and threats....

"Student safety is our primary concern, and although this was a toy gun, it is still a very serious offense and it is a violation of school rules. We will not tolerate weapons of any kind on school property."

I do understand the danger that toy guns can be mistaken for real ones. But it's not right to charge him with "possessing a weapon." A toy gun is not a weapon. Something doesn't become a weapon because it looks like one. I'm reminded of the Canadian woman who had a two-inch gun charm on a necklace and was hassled by the TSA for that.

The boy needed to be educated and gently disciplined. "You shouldn't have done that. Don't do it again." He didn't need to be "booked and fingerprinted." Zero-tolerance policies in schools require no brains to administer, as when that 13-year-old girl was strip-searched for ibuprofen (later ruled by U.S. Court of Appeals to be unconstitutional).