The danger of jumbo snow globes 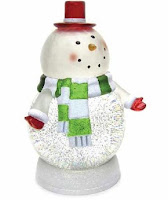 WASHINGTON (Reuters) - Some 7,000 jumbo-sized snow globes were recalled by Hallmark Cards Inc. because the holiday decorations can act as a magnifying glass when exposed to sunlight and ignite nearby combustible materials, the U.S. Consumer Product Safety Commission said on Tuesday.

The snowman-shaped snow globes were sold in October and November at Hallmark Gold Crown stores nationwide for about $100 each.

The consumer agency said Hallmark has received two reports of the snow globes igniting nearby materials but no injuries have been reported.