Paramedics consider man "not worth saving" - he dies 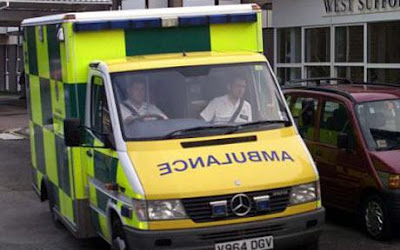 The ambulance crew had been sent to Barry Baker's detached home after he dialled 999 saying he thought he was having a heart attack.

Ambulance controllers kept Mr Baker talking on the phone as they ordered the paramedic and ambulance technician to use their blue lights to get to him as quickly as possible.

However the 59-year-old, who lived alone, collapsed unconscious while talking on the phone, leaving the line open to the control centre as he lay on the floor.

A police source said the ambulancemen were then heard over the phone discussing Mr Baker and allegedly saying "words to the effect that he was not worth saving"...

They are then heard discussing what to tell ambulance control and allegedly decide to say that he was already dead when they arrived.

"Obviously the crew did not realise that the phone was still connected and, of course, the 999 call was all recorded on tape," said the source.

"The tape recording of what the paramedics allegedly said has been handed over to the Sussex Police Major Crime Team as evidence."

"The men were arrested by Sussex Police on December 5 on suspicion of wilfully neglecting to perform duty in a public office.

(Text and image credit to the Telegraph)