A cheerful story for the holiday season 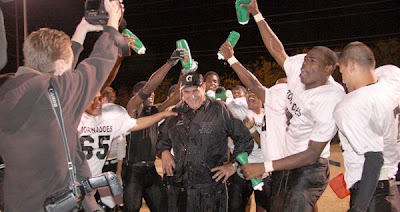 And even though Faith walloped them 33-14, the Gainesville kids were so happy that after the game they gave head coach Mark Williams a sideline squirt-bottle shower like he'd just won state. Gotta be the first Gatorade bath in history for an 0-9 coach.

But then you saw the 12 uniformed officers escorting the 14 Gainesville players off the field and two and two started to make four. They lined the players up in groups of five—handcuffs ready in their back pockets—and marched them to the team bus. That's because Gainesville is a maximum-security correctional facility 75 miles north of Dallas. Every game it plays is on the road.

This all started when Faith's head coach, Kris Hogan, wanted to do something kind for the Gainesville team. Faith had never played Gainesville, but he already knew the score. After all, Faith was 7-2 going into the game, Gainesville 0-8 with 2 TDs all year. Faith has 70 kids, 11 coaches, the latest equipment and involved parents. Gainesville has a lot of kids with convictions for drugs, assault and robbery—many of whose families had disowned them—wearing seven-year-old shoulder pads and ancient helmets.

So Hogan had this idea. What if half of our fans—for one night only—cheered for the other team? He sent out an email asking the Faithful to do just that. "Here's the message I want you to send:" Hogan wrote. "You are just as valuable as any other person on planet Earth."

Read the rest of the story. It has a certain resonance for me, because when I was in junior high school we used to play basketball games against kids in a reform school. But I think most people (especially TYWKIWDBI regulars) should read the whole story. You might even be choked up by the end.

(found at Metafilter - thanks)