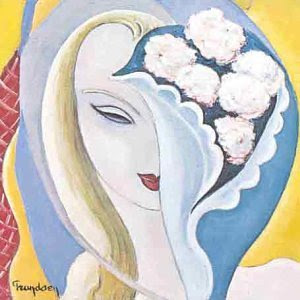 Ask someone in their 50s or 60s to name a song by Derek and the Dominos, and they will undoubtedly say "Layla." Ask them for a second song and they likely will come up blank.

Clapton created "Derek and the Dominoes" in 1970, but the group only produced the one album (cover illustrated above), and from that album only "Layla" became well-known (the inspiration for the song was George Harrison's wife, Pattie Boyd, whom Clapton later married - but see footnote below re choice of the name "Layla.").

"Layla" is remarkable for the guitar work of Clapton and Duane Allmon, for the crisp piano work of Bobby Whitlock, for the almost orchestral power of the composition, for the over 7-minute length (without having to listen to a cake melting in the rain), and of course for the "little bird at the end."

Addendum: The ever-present and frequently helpful "Anonymous" has pointed out in the comments section that Clapton's inspiration for the song was an Arabic legend of "Layla and Majnun." Here's part of the Wiki:

From Arab and Habib folklore the story passed into Persian literature, and in 12th century, the Azerbaijani & Persian poet Nizami wrote a famous adaptation of Layla and Majnun in Persian. In his adaptation, the young lovers become acquainted at school and fell desperately in love. However, they could not see each other due to a family feud, and Layla's family arranged for her to marry another man. It is a tragic story of undying love much like the later Romeo and Juliet, which was itself said to have been inspired by a Latin version of Layla and Majnun to an extent...

Etymologically, Layla is related to the Hebrew and Arabic words for "night," and is thought to mean "one who works by night." This is an apparent allusion to the fact that the romance of the star-crossed lovers was hidden and kept secret. In the Persian and Arabic languages, the word Majnun means "crazy." In addition to this creative use of language, the tale has also made at least one linguistic contribution, inspiring a Turkish colloquialism: to "feel like Layla" is to feel completely dazed, as might be expected of a person who is literally madly in love.

Update March 2009. The studio (album) version of Layla has been pulled from YouTube by the record company. I've put in (third from a top) a live performance which I think is not as good, but will have to do for now.