The antikythera mechanism and the Olympics 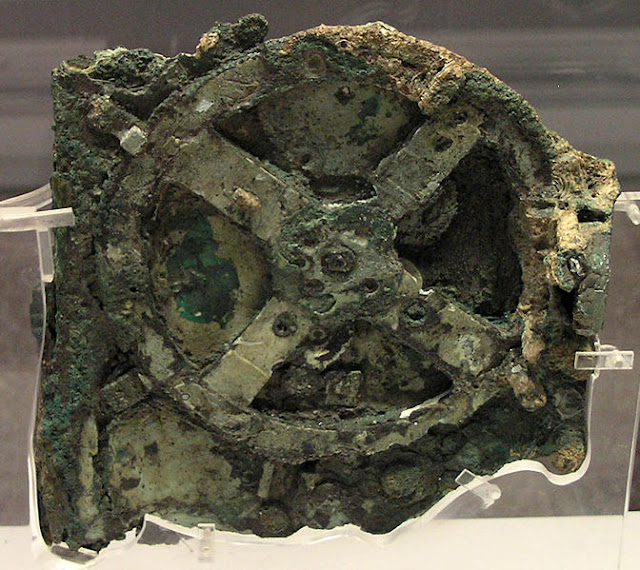 The Antikythera mechanism (top photo) was recovered in 1900 from a Greek shipwreck dating to about 100 BC. Made of bronze and of amazing complexity, it consists of at least 30 gears which allowed it to function as an astronomical computer (like an orrery), specifically for calculating solar and lunar calendars. More details are available at the Wiki page. The lower image is a modern reconstructed replica.

The device was reportedly remarkably accurate in predicting eclipses, which was "the apparent task of a second, four-twist spiral dial on the instrument's back. Its 223 divisions correspond to months in the Saros cycle, another ancient calendar system—this one an 18-year cycle—for tracking eclipses... The pattern of glyphs was highly accurate: it matched the start dates of 100 eclipses that occurred during the final four centuries BC, as determined by NASA."

I remember some of the early articles about the discovery of this device speculated that this degree of technical sophistication proved that our planet had been visited by extraterrestrials in the past.  What it proves instead is how little we appreciate the intellectual abilities of our remote ancestors.

I was reminded of the Antikythera mechanism by article in Scientific American indicating that one its principal uses was for ascertaining the dates for the Olympic games: "the researchers discovered that the markings on a smaller dial inside the Metonic one spelled out the locations of the names of Panhellenic games, the highly popular sporting events of which the most famous is the Olympics. The games were on a four-year cycle, and each quarter turn of the dial indicated which games took place that year in the cycle."
2021 news update here.