I've seen numerous articles this week celebrating the 500th anniversary of Martin Luther's posting of the Ninety-Five Theses, and thereby launching the Reformation.  I thought I'd post something a bit different.

The modern Lutheran Church places a high value on ecumenism and tolerance of religious diversity.
Such could not be said for the church's namesake, as exemplified by this excerpt from Martin Luther's On The Jews and Their Lies: 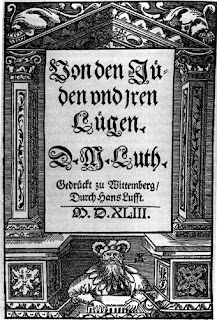 "...aside from the Devil, you have no enemy more venomous, more desperate, more bitter, than a true Jew... What shall we Christians do with this rejected and condemned people, the Jews? Since they live among us, we dare not tolerate their conduct, now that we are aware of their lying and reviling and blaspheming.... First, to set fire to their synagogues or schools and to bury and cover with dirt whatever will not burn, so that no man will ever again see a stone or cinder of them. This is to be done in honor of our Lord and of Christendom, so that God might see that we are Christians.... Second, I advise that their houses also be razed and destroyed.... Third, I advise that all their prayer books and Talmudic writings, in which such idolatry, lies, cursing and blasphemy are taught, be taken from them.... Fourth, I advise that their rabbis be forbidden to teach henceforth on pain of loss of life and limb."

Via MetaFilter, where there is an extensive discussion thread.   See also the Wikipedia entry.

I don't remember hearing any of this in Luther League.