"Hedge apples" may "remember" the megafauna 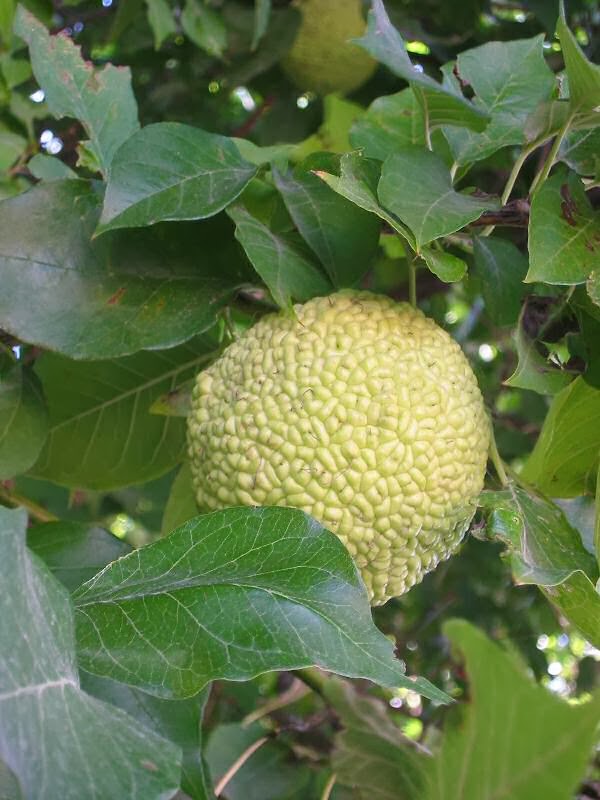 
Consider the fruit of the Osage-orange, named after the Osage Indians associated with its range. In the fall, Osage-orange trees hang heavy with bright green, bumpy spheres the size of softballs, full of seeds and an unpalatable milky latex. They soon fall to the ground, where they rot, unused, unless a child decides to test their ballistic properties.

Trees that make such fleshy fruits do so to entice animals to eat them, along with the seeds they contain. The seeds pass through the animal and are deposited, with natural fertilizer, away from the shade and roots of the parent tree where they are more likely to germinate. But no native animal eats Osage-orange fruits. So, what are they for? The same question could be asked of the large seed pods of the honeylocust and the Kentucky coffeetree...

In terms of evolutionary time, the difference between 13,000 years ago and now is like the difference between Friday, December 31, 1999 and Saturday, January 1, 2000. We may assign those two days to different centuries or millennia, but they are still part of the same week. Likewise, all the animals and plants of 13,000 years ago belong just as much in the present. In fact, they still live in the present, with just one major exception: most of the big and fierce animals are now gone...

Now let’s return to the forlorn fruit of the Osage orange. Nothing today eats it. Once it drops from the tree, all of them on a given tree practically in unison, the only way it moves is to roll downhill or float in flood waters. Why would you evolve such an over-engineered, energetically expensive fruit if gravity and water are your only dispersers, and you like to grow on higher ground? You wouldn’t. Unless you expected it to be eaten by mammoths or ground-sloths...

It’s true that such adaptations are now anachronistic; they have lost their relevance. But the trees have been slow to catch on; a natural consequence of the pace of evolution. For a tree that lives, say, 250 years, 13,000 years represents only 52 generations. In an evolutionary sense, the trees don’t yet realize that the megafauna are gone.

More at the link, and a big hat tip to Quigley's Cabinet for the via.

Reposted from 2013 because when I walked the Arboretum this past week, the ground was littered with "hedge apples" - 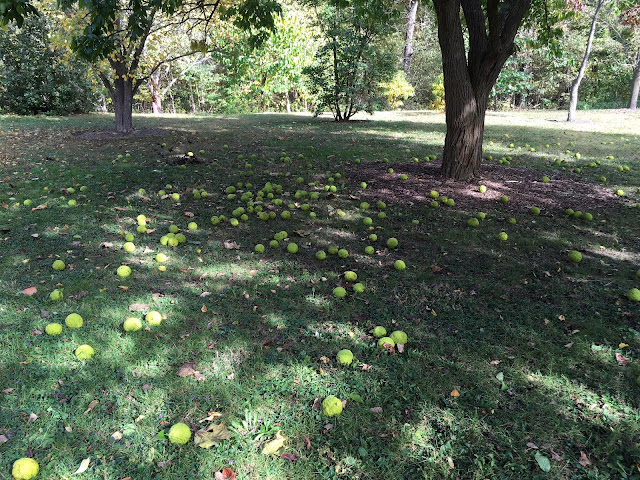 And not a ground sloth in sight.