Why koalas are sometimes "treehuggers" 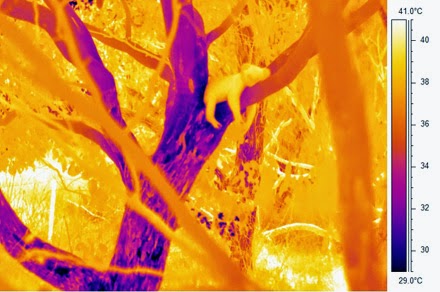 From an interesting report in Wired:


In a new paper in the Royal Society’s Biology Letters, a team of Australian and American researchers report that as temperatures rise, koalas tend to put more of their bodies in contact with the trees they inhabit. The science behind this involves something called conductive heat transfer, wherein a warm object (say, a koala) transfers heat to a cooler one (like a tree) and both objects approach the same temperature. The trees stay cool by sucking up water hidden deep in the soil from the baking sun...

They found that as it got hotter outside, the koalas tended to sit lower in the trees, in a posture now formally described in the scientific literature as “tree-hugging.” In milder weather, the koalas sat higher, reclined back, or rolled themselves into balls.

“Koalas have a very limited diet and so will, when given the opportunity, choose food trees,” says Warren Porter, a co-author and professor of zoology at the University of Wisconsin in Madison. However, the koalas preferred acacia trees over eucalyptus in warmer weather. That makes sense: the acacias, which the koalas do not eat, tended to be 6.5 – 8.5°F cooler than the eucalyptus trees the koalas dine on.

Butterflies also take advantage of conductive heat transfer, but in their case it is used to warm their bodies on cool days.