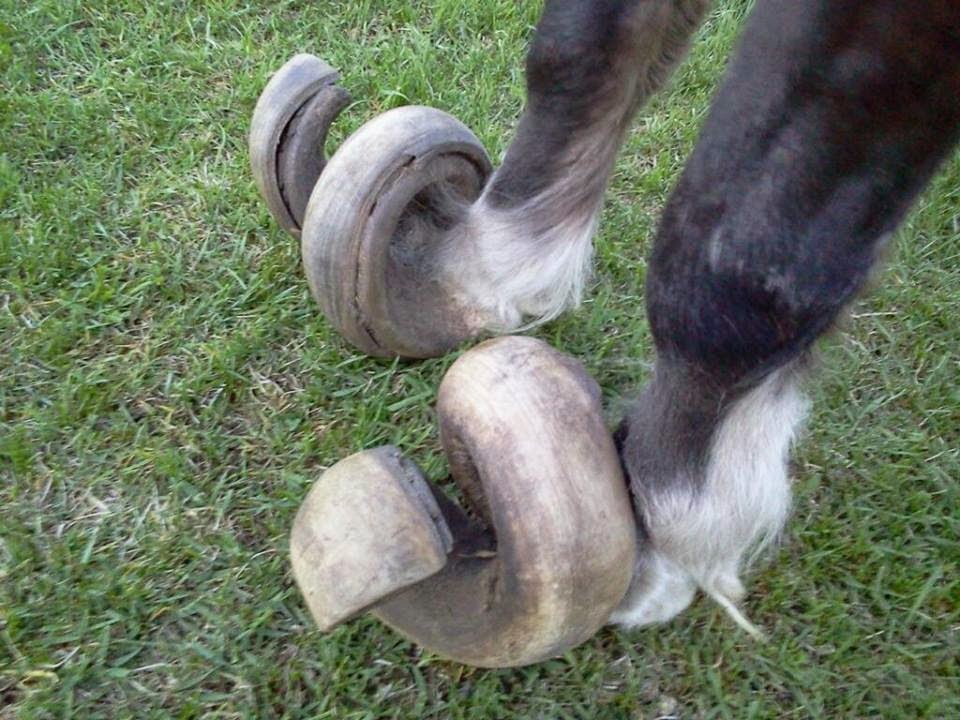 There may be more pathology at play here rather than just a simple lack of trimming.
Some horse owners/enthusiasts out there may be able to clarify.

Addendum:  A tip of the blogging hat to reader Mirar, who found one explanation offered in a Reddit thread:


[T]his is laminitis. Its caused from over eating and the rotation of the coffin bone in the hoof. It's this bad because the horse hasn't had hoof care in a while.


This is the result of years of neglect. Laminitis is quite possibly comorbid, but it doesn't cause hoof overgrowth.

Laminitis is a breakdown of the tissues (lamine) that connect the hoof wall to the bone. It is as excruciatingly painful as it sounds. It's most commonly caused by a too-rich diet, but it can also be caused by other problems, like severely neglected and distorted hooves. Diagnosis usually requires taking an x-ray and looking at the position of the bone in the hoof (looking for 'rotation of the coffin bone'). Hooves grow like our fingernails, so the hoof shape can be fixed eventually, but laminitis is much more difficult to repair and can be so painful that euthanization is the only humane option.


Google image search seems to indicate that this is a photo of the case of "Dusty the Pony".   This post at Strange Biology has a somewhat happy ending as Joel Hulst in Minnesota has apparently significantly improved the condition of the poor animal.

Photo found at imgur (via The Soul is Bone) without attribution to the original source; no comparable image found with a TinEye reverse image search.