Skeletal remains of a "hellhound" found 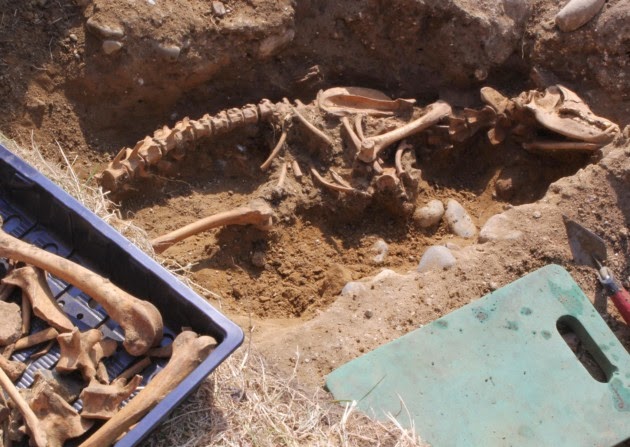 It's real - but not from hell:


Since the middle-ages, legend has spread of a fearful beast once said to stalk [Suffolk's] coastline and countryside.

Despite tales of a fiery-eyed monster showing up in graveyards, forests and roadsides - and an account of claw marks surfacing on the door to Blythburgh Church - the giant dog’s existence has been reserved to the annals of folklore.

Until now, perhaps, as archeologists have revealed evidence of huge skeletal remains unearthed by a member of the public in the trenches at Leiston Abbey last year...

“The dog is huge - about the size of a Great Dane - and was found near where the abbey’s kitchen would have been.

“It was quite a surprise. We’re all dog lovers and we have a site dog with us on our digs, so it was quite poignant. “Even back then, pets were held in high regard.” 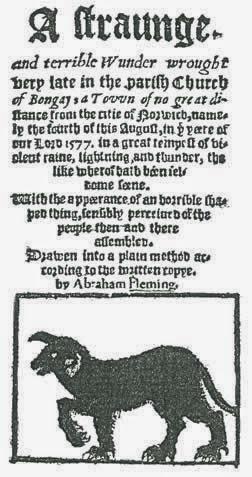 Black Shuck, Old Shuck, Old Shock or Shuck is the name given to a medieval hellhound in England. This devil dog was said to have black fur, flaming eyes, sharp teeth and claws, and great strength. Locals described sightings of Black Shuck in graveyards, forests, and roadsides. Shuck’s most famous attack happened on August 4th, 1577 at two churches in Blythburgh
and Bungay in the English countryside, about seven miles from Leiston Abbey.

During a storm on August 4th 1577, Black Shuck reportedly broke through the doors of Holy Trinity Church in Blythburgh and charged through a large congregation. It was during this attack that he allegedly killed a man and a boy, right before the church steeple collapsed through the roof.  It was during this attack that Black Shuck left claw marks on the north door of Holy Trinity Church that are still visible today...

Though musing about the earthly remains of a legendary creature or cryptid is always fun, this giant skeleton probably belonged to an abbot’s faithful canine companion or hunting dog. At best the sightings of this huge, domesticated dog by superstitious people may have sparked the rumors about Black Shuck.