Summer is the time for travel, and thus the opportunity for me and the readers of this blog to visit CCC-constructed stonework projects around the country.  These photos come to us courtesy of reader Christopher, who recently traveled to Albuquerque, and found this stone structure at an altitude of 10,000+ feet along the Sandia Crest Road. 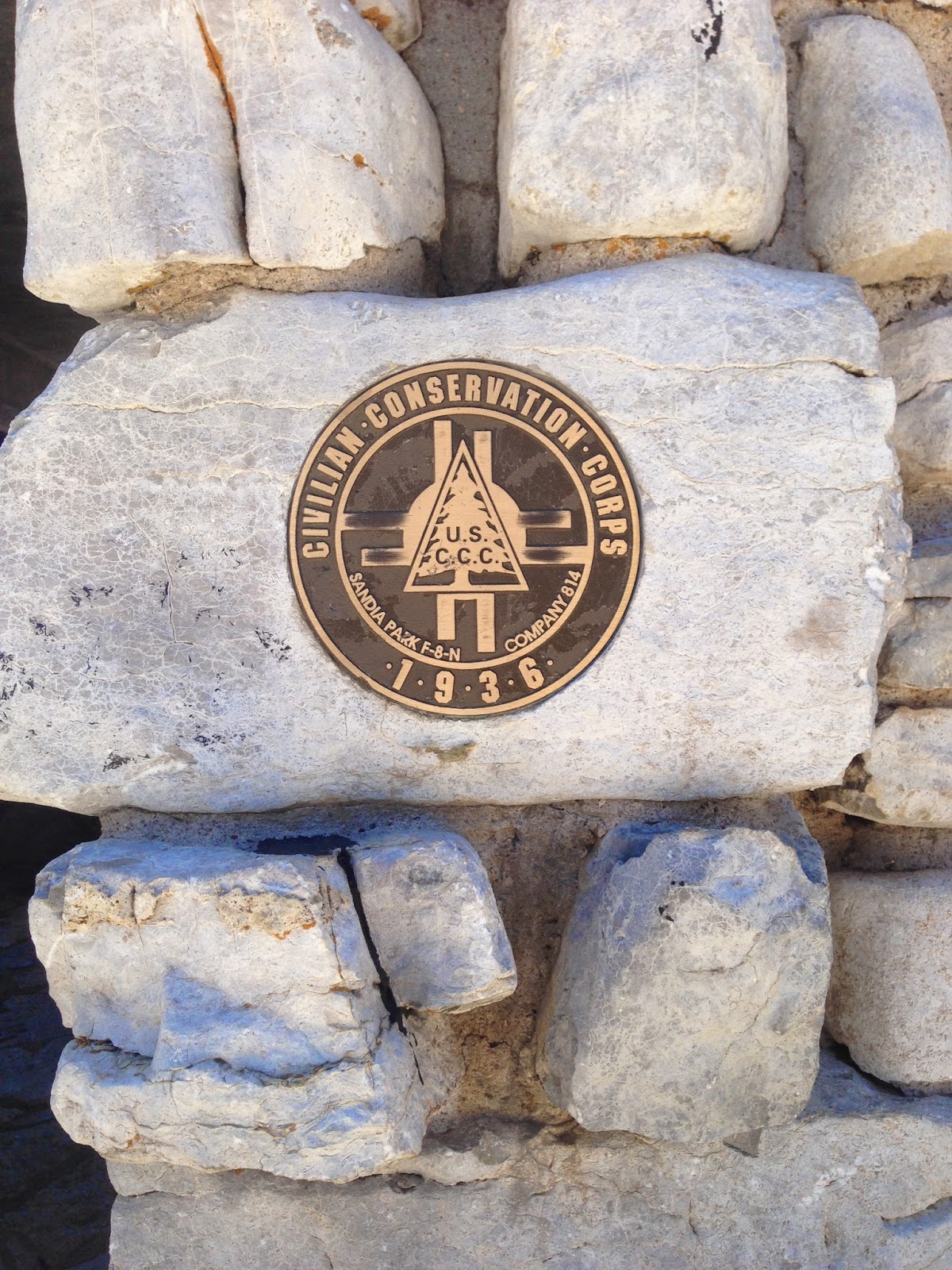 A plaque embedded in the stone confirms the provenance of the structure.  It is classic CCC work in that it makes use exclusively of local stone.  The style obviously does not involve tight junctions, and the overall appearance of a partially-collapsed "ruin" is clearly an artistic endeavor.  I found this explanation online:


The trail starts out along the crest and then wanders into the woods for a while, before skirting the edge of Kiwanis Meadow and winds its way back towards the crest and to the Kiwanis rock house. In the 1920's the Kiwanis Club of Albuquerque built a log cabin on the site which was destroyed by fire a couple of years later. A second log cabin was destroyed by high winds. In the 1930's the Kiwanis Club asked the Civilian Conservation Corps to build them a new cabin, which they did in the summer of 1936. The CCC constructed the cabin out of local limestone, and in the style known as "Rustic Aesthetic." 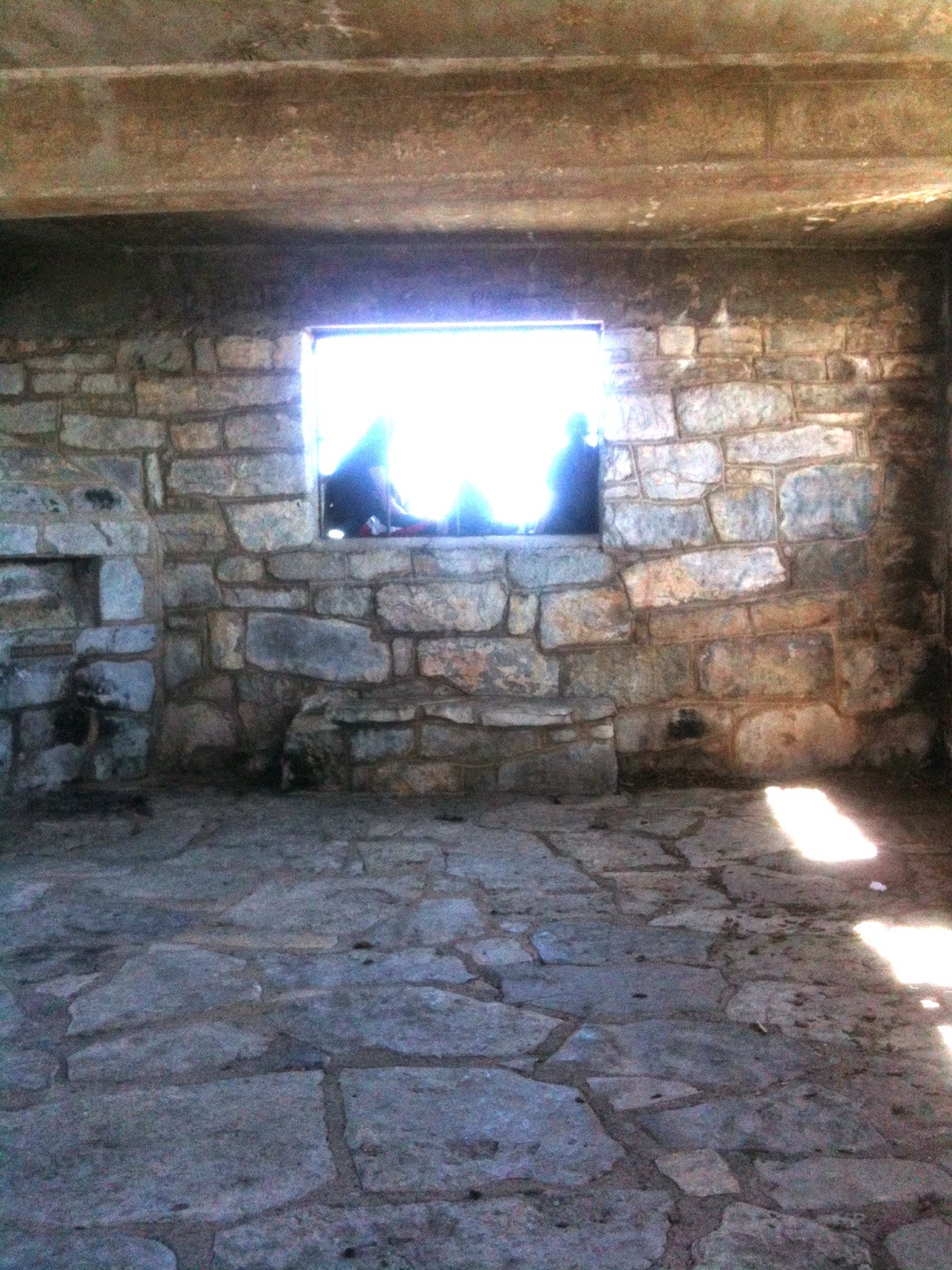 Inside, the structure seems to follow the general pattern of other state- and national-park CCC buildings, serving as a shelter from inclement weather, with a basic fireplace? for cooking.

The Albuquerque Journal had this additional information in 2007:


To clean a year's worth of graffiti off the Kiwanis Cabin at Sandia Crest, it takes three archaeologists, a truck with a pressure washer, someone to drive the truck and someone to use the washer in a way that doesn't damage the cabin...

The cabin had windows on three sides, a fireplace and a door, but the fireplace was sealed and the windows and door were removed.  "Beginning in the '40s the windows started being broken," Hudson said.

So sad to hear about the graffiti and vandalism performed by mindless cretins.

A quick search this morning produced a detailied pdf about the role of the CCC in the New Mexico park system.  I also found these notes about the CCC in New Mexico in the Forestry Service's website:


In the span of eight years, from 1933 to 1941, 54,585 Civilian Conservation Corps enrollees in New Mexico built hundreds of roads and rails, 795 bridges, 472 lookout towers large dams and reservoirs, installed millions of rods of fences and planted millions of trees for reforestation and to prevent gully erosion.  When these New Mexico men joined the corps, along with 3.5 million other Americans, the country was in desperate straits. Close to 25 percent of the population was unemployed. Hunger and despair had become a way of life.  A group of local corps alumni want to see a memorial CCC museum of national stature built on the site where CCC Camp 814 F-8-N Sandia Park once stood on a piece of land just off NM 536, the Sandia Crest Road. They want people to know what they accomplished in youthful days during the Great Depression. And they want today’s youth to know that youth are a major asset to this country, just as the CCC men were when they were boys. The CCC was the greatest-ever conservation effort in American history.

I have a variety of pleasant memories of the Sandias, dating from the time I lived in Dallas and visited family in Grants and friends in Albuquerque.  But despite hiking and playing frisbee in the mountains, I don't remember ever having encountered this cabin.

Again, a hat tip to reader Christopher for sending me the photos; if readers in the Albuquerque region have photos of other stonework along the Sandia Crest Trail (bridges, stairways), please feel free to send them along.