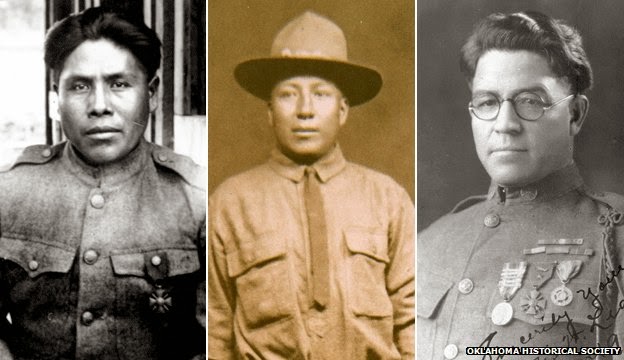 Most readers will already be familiar with the Navajo code talkers who served vital roles during the second World War.  I, for one, however, didn't realize that code talking was first made use of during the Great War.


In the autumn of 1918, US troops were involved in the Meuse-Argonne Offensive on the Western Front. It was one of the largest frontline commitments of American soldiers in WW1, but communications in the field were compromised. The Germans had successfully tapped telephone lines, were deciphering codes and repeatedly capturing runners sent out to deliver messages directly...

The solution was stumbled upon by chance, an overheard conversation between two Choctaw soldiers in the 142nd Infantry Regiment. The pair were chatting in camp when a captain walked by and asked what language they were speaking...

"Using the Choctaw language had huge advantages," says Dr William Meadows of Missouri State University, the only academic to have studied and written extensively on the Choctaw code talkers. "It was a largely unknown language. Only a few American Indian tribes had more than 20,000 people so their languages weren't widely spoken and most weren't written down...

Even if the Germans were listening, they couldn't understand. It was also the quickest way of coding and decoding information, faster than any machine, giving US troops a crucial edge over the enemy... It is believed none of the languages or codes used have ever been broken by an enemy.

Further details at the BBC, where note is made of this irony:


But at the same time,the Choctaw language was under pressure back in the US. It was a time of cultural assimilation. Government attempts to "civilise" American Indians involved putting their children in state-run boarding schools, where they were often severely punished for speaking in their native tongue.