There may not be a "Mozart effect" 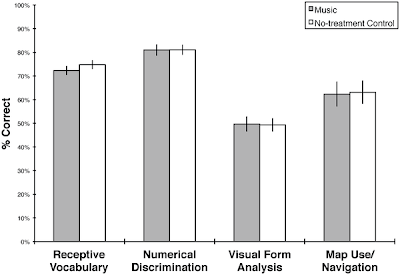 According to an article in the Harvard Gazette, the idea that studying music improves intelligence is probably a myth:


Though it has been embraced by everyone from advocates for arts education to parents hoping to encourage their kids to stick with piano lessons, a pair of studies... found that music training had no effect on the cognitive abilities of young children. The studies are described in a Dec. 11 paper published in the open-access journal PLoS One.

“More than 80 percent of American adults think that music improves children’s grades or intelligence,” Mehr said. “Even in the scientific community, there’s a general belief that music is important for these extrinsic reasons. But there is very little evidence supporting the idea that music classes enhance children’s cognitive development.”

The notion that music training can make someone smarter, Mehr said, can largely be traced to a single study published in Nature. In it, researchers identified what they called the “Mozart effect.” After listening to music, test subjects performed better on spatial tasks.

Though the study was later debunked, the notion that simply listening to music could make someone smarter became firmly embedded in the public imagination...

Details and discussion at the links.