Muggers use sticks as tools 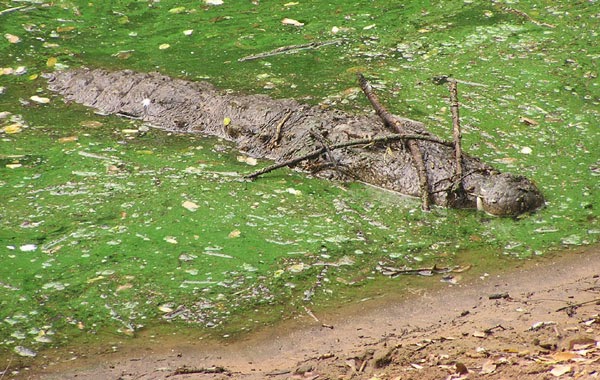 Mugger crocodiles, that is:


As described by Dinets et al. (2013), Mugger crocodiles Crocodylus palustris in India and American alligators Alligator mississippiensis in the USA have both been observed to lie, partially submerged, beneath egret and heron colonies with sticks balanced across their snouts. Birds approach to collect the sticks for use in nest building and…

The occurrence of sticks on the crocodylians is not random: stick-displaying behaviour was most frequently observed both in those crocodylians living at rookeries and was exclusively observed during the egret and heron nesting season, being most frequent in late March and April (when the egrets and herons are working hard to find sticks) (Dinets et al. 2013).

The possibility that stick-displaying behaviour results from a random association between rookery-frequenting crocodylians and floating sticks was deemed unlikely by the authors, since floating sticks are extremely rare in the pools concerned, especially at the time of year concerned (partly this is because the local trees – baldcypresses and water tupelos – don’t shed twigs, but also because the nesting birds rapidly remove floating sticks for nest-building). Therefore, deliberate collection and employment of sticks by the crocodylians seems most likely.

More details at the Tetrapod Zoology blog of Scientific American.

TIL:  "Crocodylians" is an acceptible alternate spelling of "crocodilians."

Also:  They aren't called "mugger" crocodiles because they ambush their prey.  It's the opposite -


The name "mugger" is a borrowing of Hindi magar. This is in turn derived from Sanskrit makara "crocodile; mythical water monster; sign of the zodiac".

So the human malefactors are named after the crocs.  You learn something every day.