There are many Christmas tree farms in Wisconsin, and I've often seen focal cinnamon-brown dead trees, which I assumed was due to drought.  Quite the opposite.  Some of these trees may be dying from a water-related fungal disease.


With the rapid increase in Fraser fir Christmas tree plantings, growers are facing a number of production issues. Most notably, Phytophthora species represent a serious limitation to the North Carolina Christmas tree market. Phytophthora root rot and stem canker, caused by several Phytophthora species, has been associated with significant damage to Fraser fir since the 1960s. Phytophthora is a fungus-like organism that inhabits the soil and infects many woody plants through the roots. It can lie dormant in the soil for several years, waiting for a susceptible host such as Fraser fir and the right 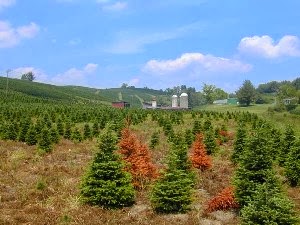 The disease is correlated with abnormally high soil moisture caused by frequent precipitation, flooding and poor soil drainage, as Phytophthora produces spores in response to near-saturated soils. Phytophthora species can spread by contaminated equipment, with infected nursery stock, or with water runoff from nearby infested sites. Transplanting infected nursery seedlings represents a major contribution to disease incidence in the field, yet there are no current standard methods for certifying seedlings as pathogen free.