Could America elect an atheist president? 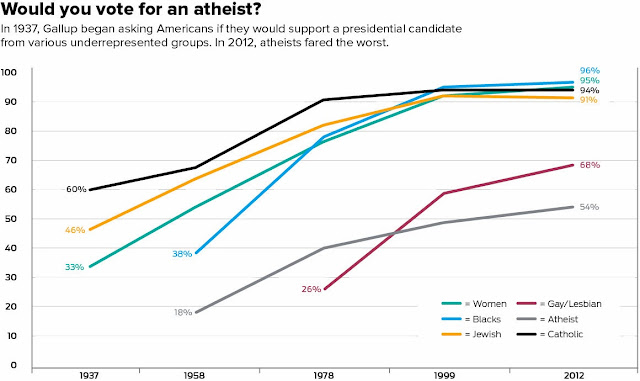 Attitudes are changing.  But very slowly.


For starters, consider that there is not a single self-described atheist in Congress today. Not one. It wasn’t until 2007 that Rep. Pete Stark, a Democrat from Northern California, became the first member of Congress and the highest-ranking public official ever to admit to being an atheist. (And even he framed it in terms of religious affiliation, calling himself “a Unitarian who does not believe in a supreme being.”) Stark was elected twice after this, but when the 20-term congressman lost his seat last year, it was to a 31-year-old primary challenger who attacked him as irreligious, citing, among other things, Stark’s vote against our national motto: “In God We Trust.”...

The Cold War changed all that. Atheism began to seem almost treasonous amid tensions between the United States and the Soviet Union, because the Soviets were officially and emphatically against religion. Sen. Joseph McCarthy famously used the phrase “godless communists” to bash the political left and others he considered his enemies. In this context, President Dwight D. Eisenhower signed laws in the mid-1950s inserting “God” into our Pledge of Allegiance and putting it on all our money. (It had been on most coins earlier, but Eisenhower made “In God We Trust” our national motto, henceforth to appear on all bills.)

More about the history of religion and American politics at Politico.