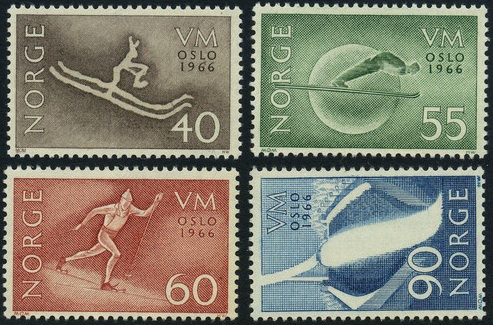 Many years ago I visited the famous Holmenkollen ski jump in Norway.  Recently, while reading about the Nordic ski championships held there in 1966, I saw the embedded photo of a set of stamps issued in Norway to commemorate the event.

My eye was caught by the stamp at the upper left.  The 55 and the 60 show modern jumpers and X-country skiers, and the 90 shows a stylized Holmenkollen.  The 40 looked to me like a cave drawing (or other geoglyph).

So I started to research the antiquity of skiing.  Medium aevum (via Uncertain Times) had this to say -


The primitive ski dated back to 1010, and is thought to be Greenland’s oldest ski brought by Norsemen circa 980 A.D...

The oldest account involves the famous story from 1206 A.D. of the Birkebeiners during a civil war in medieval Norway. Considered the underdog, the Birkebeiners were at war against a rival faction known as the baglers. Following the death of the Birkebeiner chief, the baglers feared a rival in his young son Håkon Håkonsson. To protect him, two of the most skillful Birkebeiner skiers, with toddler in tow, skied through treacherous conditions over the mountains from around Lillehammer to safety in Østerdalen valley.

- accompanied by this way cool painting: 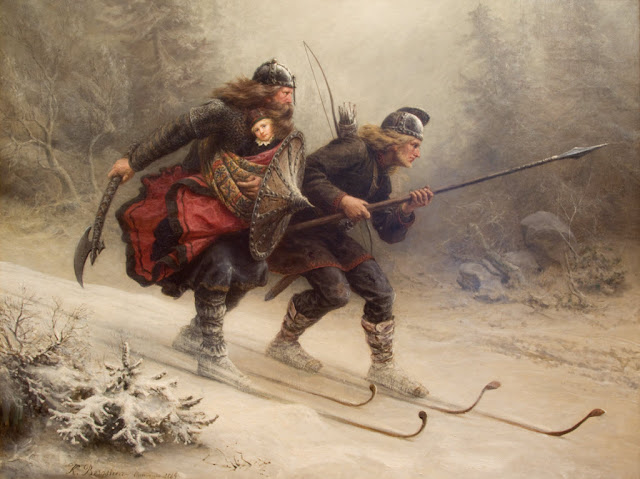 But more relevant to the image on the Norwegian stamp I found the following:


The oldest and most accurately documented evidence of skiing origins is found in modern day Norway and Sweden. The earliest primitive carvings circa 5000 B.C. depict a skier with one pole, located in Rødøy in the Nordland region of Norway.

That's what's on the stamp, according to a Facit catalogue.  Now to try to wrap my mind around the idea of someone skiing in 5000 BC (predynastic Egypt, maize introduced to Mexico, wheel invented in Mesopotamia, beer brewing invented...), and then noting the accomplishment by carving it on a stone.

Addendum:
I posted the above back in January of 2012.  This week I encountered an interesting article and video at National Geographic on the origins of skiing:


The hunting party slowly glides into the Altay Mountains in search of elk. It is dead calm, minus 38°F. Just as their ancestors have for millennia, the five men traverse deep, feathery snow buoyed on handmade skis hewed from spruce, with strips of horsehide attached to the bottoms. In lieu of poles each man carries a single wooden staff. Since boyhood, they have learned to master their deceptively crude equipment with exquisite efficiency and grace—the grain of the horsehair providing traction to move uphill and a slick surface for rapid descents, the staff aiding balance...

The hunters come from seminomadic Tuvan-speaking clans who inhabited pockets of the Altay. Technically, they are Chinese citizens, but their log cabins stand within 20 miles of the converging borders of Russia, Kazakhstan, and Mongolia, and the roots of their language lie to the north in Siberia, where the majority of Tuvans now live. Anthropologists say their lineage includes Turkic and Samoyed tribes who at various periods over the past several thousand years moved through these mountains...

Serik describes a hunt when Tursen skied down on a bounding deer, leaped on its back, grabbed its antlers, and wrestled it down into the snow, the animal kicking and biting. It is a scene that has been repeated for thousands of years in these mountains. Within the Altay, a handful of petroglyphs have been discovered depicting archaic skiing scenes, including one of a human figure on skis chasing an ibex. Since petroglyphs are notoriously hard to date, it remains a controversial clue in the debate over where skiing was born. Chinese archaeologists contend it was carved 5,000 years ago. Others say it is probably only 3,000 years old. The oldest written record that alludes to skiing, a Chinese text, also points to the Altay but dates to the Western Han dynasty, which began in 206 B.C.

Norwegian archaeologists also have found ski petroglyphs, and in Russia, what appears to be a ski tip, carbon-dated to 8,000 years ago, was excavated from a peat bog. Each nation stakes its own claim to the first skiers. What is widely accepted, however, is that whoever first strapped on a pair of skis likely did so to hunt animals.

I'm fascinated by the fact that the grain of horsehair allows traction for skiing uphill, and by the observation above that "the earliest primitive carvings circa 5000 B.C. depict a skier with one pole" - as does this video (via The Dish):