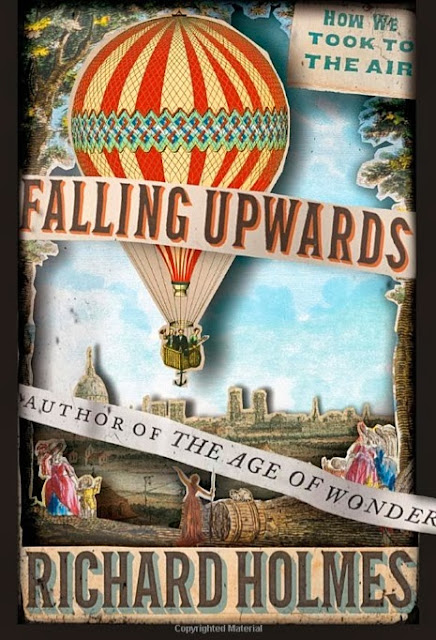 Three years ago I reviewed and recommended Richard Holmes' The Age of Wonder, so I was pleased this year to encounter his new book.  Falling Upwards is a scholarly compendium of the history of hot air ballooning.

From one point of view, the book is clearly "TMI," because I was in no need of 400 pages of information on this topic, but with some judicious skimming I found the process enjoyable because, as in the other book, he incorporates a lot of interesting material.

I learned, for example, how the "trail rope" dangling from early hot air balloons served as a useful "feedback loop" for maintaining a constant low altitude:


"This was a simple, self-regulating ballast device, which allowed a gas balloon to adjust its own height when flying at altitudes below five hundred feet... Whenever the ballon dropped closer to the ground, more trail rope - and hence more ballast weight - was transferred from the balloon basket to the earth.  Thus lightened, the balloon would rise again to a new point of balance... So Green [in 1835] employed his trail rope with what now seems amazing insouciance across the whole countryside: dragging it crashing through lines of trees and hedgerows, hissing across fields of crops or cattle, and not infrequently lifting the odd tile or slab of stonework from church roofs or isolated barns... (p. 57) 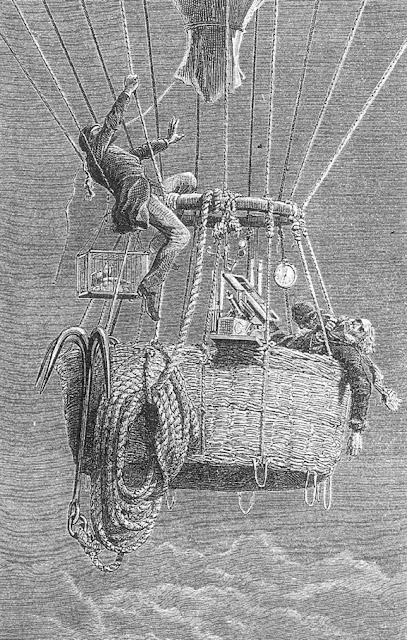 - delineated by a dramatic account (p. 214) of near-death at the even-by-modern-standards-remarkable altitude of about over six miles, a record that would stand for over a century.  Note that that altitude is higher than Mount Everest.  Rapidly attained.  Without supplemental oxygen.

I was pleased to read references to butterflies at high altitude: "Butterflies hover round the car of the balloon.  Until today I imagined that those little things passed their short existence among the flowers of the fields, and that they never rose to any great height in the air.  But in fact they rise higher than any of the birds of our forests, and soar to many thousands of metres above the ground..." (237)

The account of the siege of Paris in 1870 (see the post below this one) will interest philatelists because of the advent of balloon mail (and the incorporation of microfilm as a method to expedite the process).  There is also extensive discussion of hot air balloons as monitoring devices during the U.S. Civil War.

I have mostly offered here a series of TYWK-type anecdotes; for more conventional reviews of the book, see The Spectator, The Guardian, or The New York Times.