"I do not recommend English families to eat elephant as long as they can get beef or mutton." 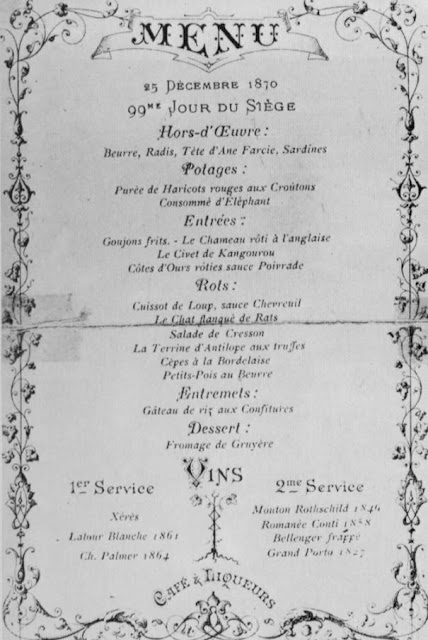 Your Christmas dinner will undoubtedly be more nutritious, better tasting, and less exotic that that experienced by the French during the siege of Paris in 1870:


On 19 September 1870, Prussian forces encircled Paris... During the siege food became scarce and the populace were forced to turn to unusual sources for their meat...

Though there were large numbers of horses in Paris (estimates suggested between 65,000 and 70,000 were butchered and eaten during the siege) the supplies were ultimately limited. Champion racehorses were not spared (even two horses presented to Napoleon III by Alexander II of Russia were slaughtered) but the meat soon became scarce. Cats, dogs and rats were the next selection for the menu. There was no control over rationing until late in the siege, so while the poor struggled, the wealthy Parisians ate comparatively well; the Jockey Club offered a fine selection of gourmet dishes of the unusual meats including Salmis de rats à la Robert. There were considerably fewer cats and dogs in the city than there had been horses, and the unpalatable rats were difficult to prepare, so, by the end of 1870, the butchers turned their attentions to the animals of the zoos. The large herbivores, such as the antelope, camels, yaks and zebra were first to be killed. Some animals survived: the monkeys were thought to be too akin to humans to be killed, the lions and tigers were too dangerous, and the hippopotamus of the Jardin des Plantes also escaped because the price of 80,000 francs demanded for it was beyond the reach of any of the butchers. Menus began to offer exotic dishes such as Cuissot de Loup, Sauce Chevreuil (Haunch of Wolf with a Deer Sauce), Terrine d'Antilope aux truffes (Terrine of Antelope with truffles), Civet de Kangourou (Kangaroo Stew) and Chameau rôti à l'anglaise (Camel roasted à l'anglaise)...

By all accounts, elephant was not tasty. Thomas Gibson Bowles, who was in Paris during the siege, wrote that he had eaten camel, antelope, dog, donkey, mule and elephant and of those he liked elephant the least. Henry Labouchère recorded:


"Yesterday, I had a slice of Pollux for dinner. Pollux and his brother Castor are two elephants, which have been killed. It was tough, coarse, and oily, and I do not recommend English families to eat elephant as long as they can get beef or mutton."