What would Shackleton have thought of this ?

"Parker Liautaud, a 19-year-old geology student, has become the youngest man to ski to the South Pole after completing the journey in 18 days. Along with his expedition partner Doug Stoup they set a new world record for the fastest journey from the coast of Antarctica to the South Pole 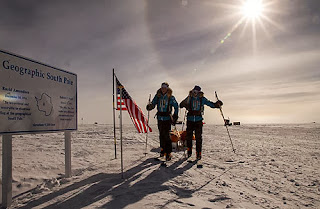 The pair skied for 349 miles (561) from the Ross Ice Shelf in Antarctica on December 3 and arrived at 13.43 on Christmas Eve in 18 days, four hours and 43 minutes. During the journey they pulled sleds weighing in excess of 80kg across the Transantarctic mountain range in temperatures as low as minus 50 degrees Celsius. The duo travelled for up to 12 hours a day, averaging 17 miles (28km) per day.

They were followed behind by a vehicle which filmed the entire journey using long-distance cameras, but offered them no support other than radio contact."


Right now three people are competing in a bike race from the edge of Antarctica to the South Pole. The winner will be the first person to bike there ever. And 35-year-old Maria Leijerstam is attempting to trike there on a really weird/badass-looking tricycle.